These past few days have just been so sad. I didn’t write a planned post because right now everything else  just seems so superficial. The school shooting in Newtown has shaken me to the core as a mother and an American. I realized that I had to speak out when I realized our country puts the right to own arms over the basic safety of my own children. This is my way of trying to help. Feel free to click off if you don’t agree or care to read more. It’s  just my hope to make my children safer in America.. 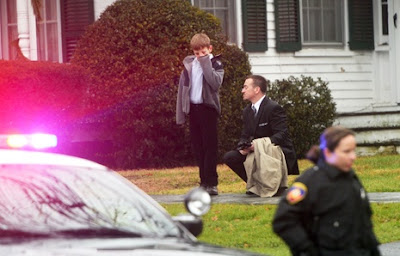 It’s wrong to keep turning a blind eye to how much the gun lobby or NRA bully this country. I can hug my kids tighter, but the best thing we can do for our children is change the gun laws in this country. If we want to make a difference, each one of us has to do something toward that goal.

If you care as much as I do about making this change, then let’s do it. You know what inspires me?

“Never doubt that a small group of thoughtful, concerned citizens can change the world. Indeed it is the only thing that ever has.” – Margaret Mead.

One problem in this country is people are too afraid to speak out and step on another’s toes. Many I know, agree that guns are too available, but won’t say it out loud. I know this to be true in my own town.  I learned it firsthand recently. Just this week in fact, a gun shop was set to open nearby two schools and a park and close to most of our homes. Myself and a few others wrote responses on our local online paper saying we objected to the location and also a gun shop so near our neighborhoods. This was about 4 days before Friday’s tragedy, and we were piled on in the comment section by a ton of men, pro-gun NRA readers. So many folks objected to this shop, but very few had the guts to say so.

I think the basic problem is we are all too cowed by the NRA to say we think that the second amendment is not a “right. ” It was something that was written long ago. Our forefathers did not intend for each and every family to own deadly weapons. If  anything those homes with guns are less safe and a gun in it ends more often than not in tragedy. A gun in the home is 22 times more likely to be used in a criminal, unintentional or suicide-related shooting than for self-defense shooting. People were horrified by the number of deaths in the September 11th attacks, but that same year a nearly equal number of children were killed in their own homes by private guns in our United States. The pro-gun shop people stated unequivocally how having guns made things safer. I disagree. I’d be okay with the NRA if they were just for safe and responsible ownership of hunting guns and the like. However, they have overturned so many laws designed to make our streets safer. They are extreme and believe any weapon is okay.
So what can we do?
-First of all, speak out and don’t be afraid to express that the huge amount of guns in our country needs to be rectified. The more we talk, share and discuss our thoughts, the more others will listen and join the conversation.
-Let’s stop thinking responsible gun ownership can make the proliferation of weapons in our world okay. I appreciate those who keep their guns locked and safe and it’s good background checks are done. Yet, there is no way to vet the sanity of every person wanting to buy a gun. Yes, let’s make it harder to buy, but let’s make less guns in this country a goal.
-Stop deluding ourselves that it’s the mental health system that has failed. Look, everyone agrees the mentally ill should not have weapons, but what about autism and other disorders as this young man had? The last time I checked autism was a broad spectrum and not classified as, “insane.” There are so many highly functioning people and children with this that there is no way to single at risk folks out.  As a matter of fact many who snap are not recognized as mentally impaired at all until after.
-Getting guns out of our homes is huge. We need to start weapon buy-back programs as Oakland just had. They are successful and they get people motivated to rid themselves of guns.
-Gun culture needs to be de-glamorized. Guns should not be routinely accepted as a male accessory in nearly every action movie. Let’s make guns the new cigarettes- something, low-brow, distasteful and shameful.. That might help. Remember those old smoking ads from the 70s? Public service announcements with gun horror stories.. What about giving tougher ratings to movies with extreme gun violence?.. The same goes for video games.
-Mothers, women and parents need to mobilize in their own neighborhoods and communities speaking out against guns and gun shows.  MADD, (Mothers Against Drunk Driving), was started by a mom and other women and is one of the most successful grassroots organizations ever. They are responsible for raising the nation wide drinking age to 21 in 1984, and much other impactful legislation. Can we start Mothers Against Guns?
-Those who use guns for hunting and sport should prove capability and need to keep a license updated just like a driver does… Personally, I’m opposed to hunting, but I’m trying to meet in the middle here..
– Assault weapons and guns that carry large rounds of ammunition should be banned outright. These are weapons of war and should be only used by the military.
– Ban the purchase of weapons online, where guns are only a click away.
-Join the Brady Campaign to Prevent Gun Violence by clicking here.  The NRA claims 4.3 million members, the Brady Campaign has 50,000. We need to help this foundation with donations, support and you can like it on Facebook here.
These are just a few things we can do in our own communities. Please share with me other ideas to remove guns in our country and keep our children safe. We owe them that.
After the horrific shooting deaths of 16 children in Dunblane Scotland in 1996, the United Kingdom promptly passed a ban on all private ownership of handguns. Historic and hunting guns are all that is allowed now. They did it, we can too.
Thank you for breading. I know it’s not my usual post.  I just had to try to do something in the name of the little children who had their lives taken from them on Friday.