Yes it was Spring Break around here this week and we opted to stay home for once. I have to say, we are surprisingly enjoying it. I cancelled all sports, piano, tutoring and appointments so we had nothing  to rush off to. My kids got the luxury this week of doing mostly what they wanted with their days. 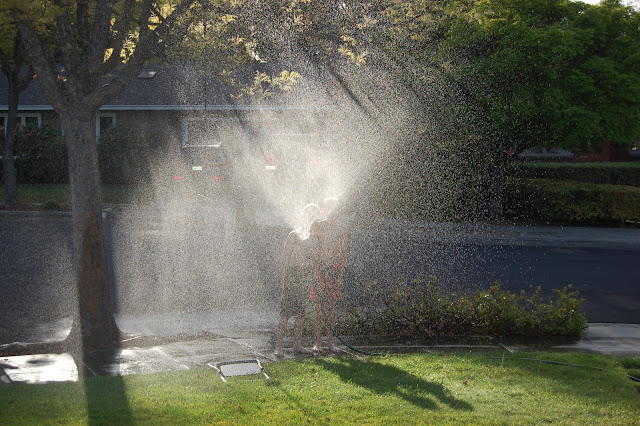 We kicked off the week by inviting a friend over who was alone all week with her 3 children while her husband traveled for work. She needed a break and was just relaxing and sipping wine as we were watching the kids enjoy some water hijinks outside. As she started to relax, we watched our sons and she said this is just bliss, watching them having fun. Literally, five minutes later, my dear friend was on the way to the emergency room when her son kicked a jar and then stepped right on the broken glass. He foot had the deepest gash…Thankfully, 7 stitches and 3 hours later he was back, but what a start to the vacation! My friend just couldn’t get a break. 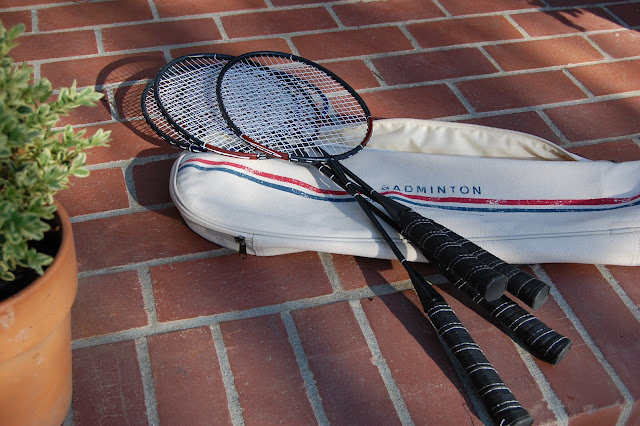 We broke out the badminton set with all the warm weather. 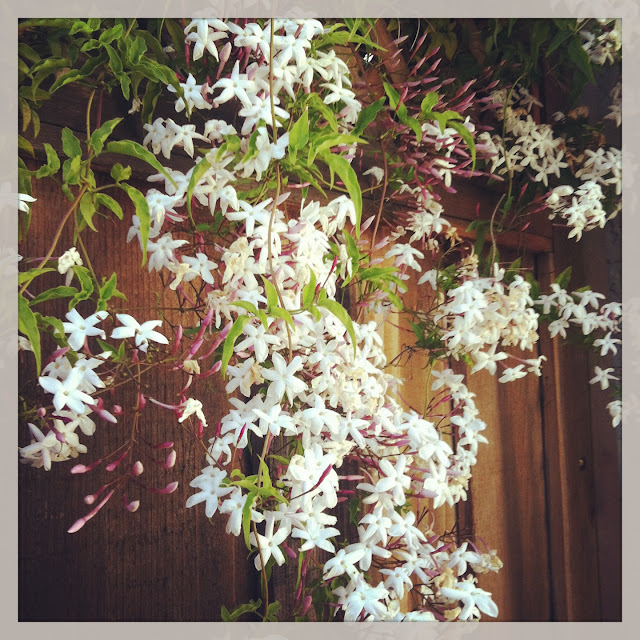 I spent some time enjoying the plants that have bloomed in my yard like the jasmine above.

The ninth grader kicked the week off with an all night Lord of the Rings movie and junk food marathon with his buddies.  He had a blast- and slept 17 hours straight the next night! That’s okay we had no where to go. 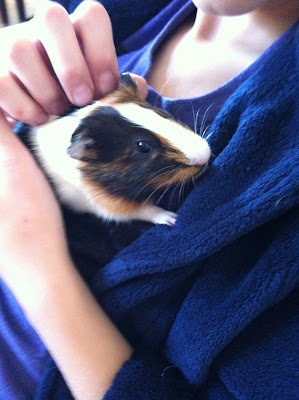 The fifth grader actually spent some time playing with items he owns (imagine that) and giving quality time to his guinea pig, which was sorely needed. Together we spent some time doing art stuff and staying up late watching a few shows we like. 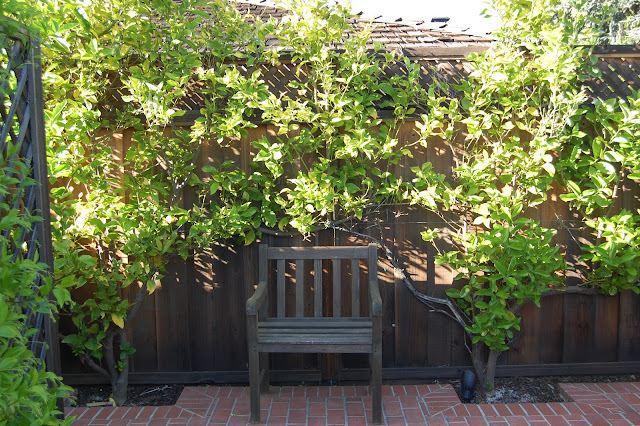 I got to play my first tennis match of a new season Saturday with my awesome friend Gigi and we won! If you know me this is huge because I’m not the most competitive person. If I had to say what I like best about tennis it’s the friends, socials, and outfits in that order…No one ever really admits that though do they? 😀 Our team is called Orange Crush and so far we are. Maybe I’m actually getting athletic in my old age… 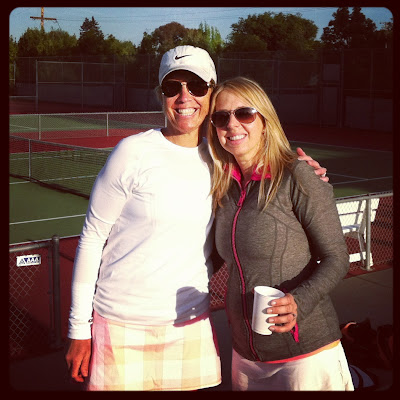 We visited my friend Karen’s new puppy named Boomer… How sweet is this guy? 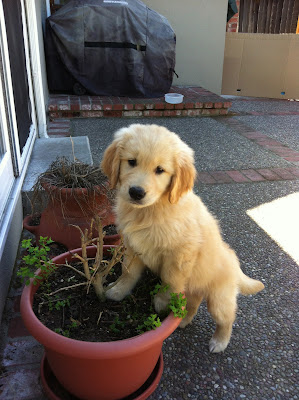 We fit in time to visit grandma and papa and have lunch together as well as a trip to our favorite bookstore in Willow Glen, Hicklebee’s. This beloved store was my boy’s favorite place as kids and it usually included grandma spoiling them with a book or toy from there. 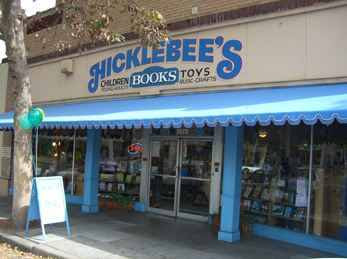 Now Hicklebee’s has a wonderful regular book section as well. My Dad and I browsed the cooking section and my Mom and I chatted about biographies. (She’s reading Shirley McLane’s daughter’s book now and apparently Shirley was a horrific mother!…but I’m digressing here.) I came away with no less than 3 books for myself and some for the boys. Well okay and a bug vacuum for the younger. 😛 Then my Dad treated us to lunch.. Things we never get to do- you know? I really love time with my parents and life gets so busy and daily it doesn’t happen.

Today we spent the morning taking my 95 year old Grandmother shopping. She needs some shopping days since she stopped driving a year ago (amazing right?) and it gives the boys a chance to help her. She loves that these, “big strong boys,” as she calls them, can take her arm through the store, fetch her items, push her cart and carry her groceries in for her. We then spent a nice lunch chatting about my Grandma’s high school years in many diverse places like Lake Chelan, Washington and in the dessert town of El Centro, California. Her father had a flourishing cement business and when the depression came the family was forced to become migrant packers of fruit and traveled far and wide to make ends meet. To hear her tell it, they were the luckiest people in the world and she had a wonderful childhood. 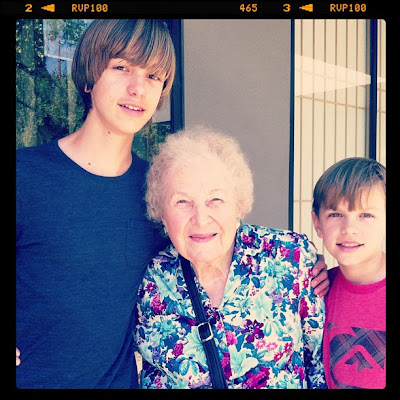 I love for my boys to hear about her life. Though people would say kids today have it all, I would venture to say that they are missing out. They will experience much less life than the generations before us due to all the electronics, computers and phones. They may have less adversities and challenges, but also less appreciation for life. I think we could all use more time with older generations. They have so much to share if we will listen. I try to make my boys ask her a lot of questions. 🙂 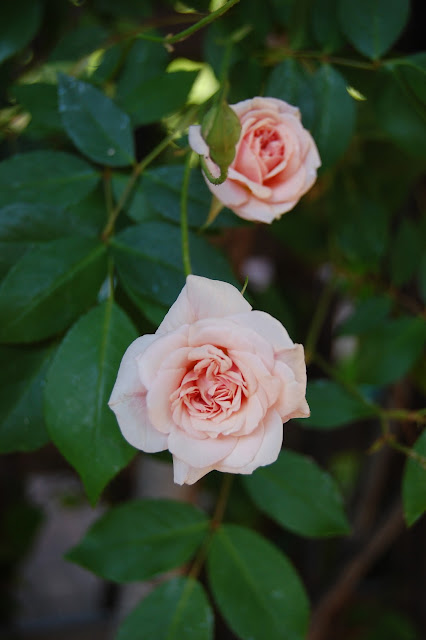 We cleaned rooms a bit and closets. Even caught up with the laundry.. I have seen the bottom of the basket people! I bought some new plants for the yard. And for the first time since we moved here, a had a whole fence of roses bloom. 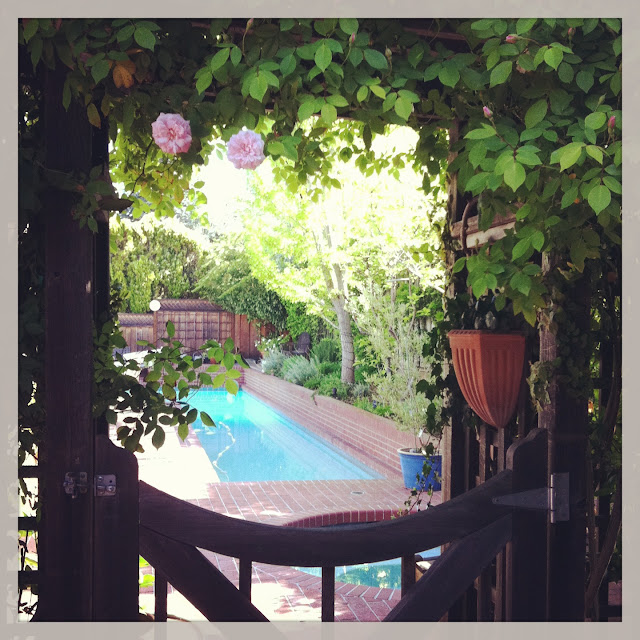 Last year our neighbors’ behind us removed a 45 year old Monterey Pine that had been dying and basically weeping all over our yard. It also was about 75% on our side and that part of the yard was shrouded in shade most of the year. It seems the roses which had been planted many years before this tree grew so large were anemic. After about a year of shock from climate change, they have blossomed better than I dreamed. 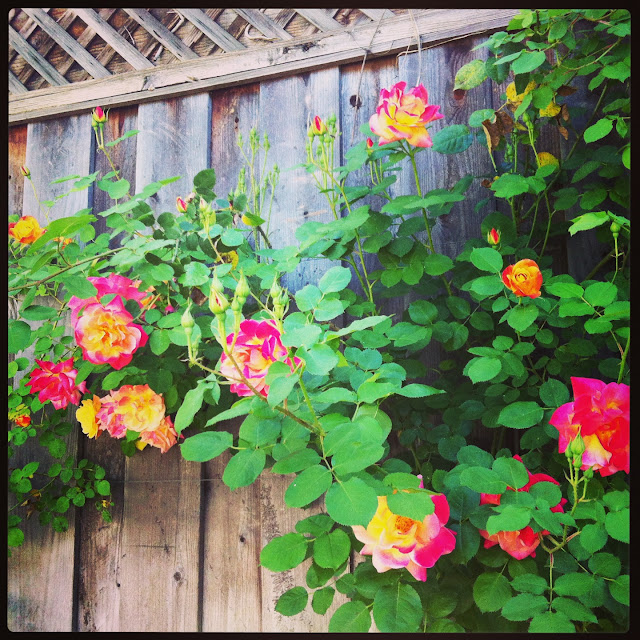 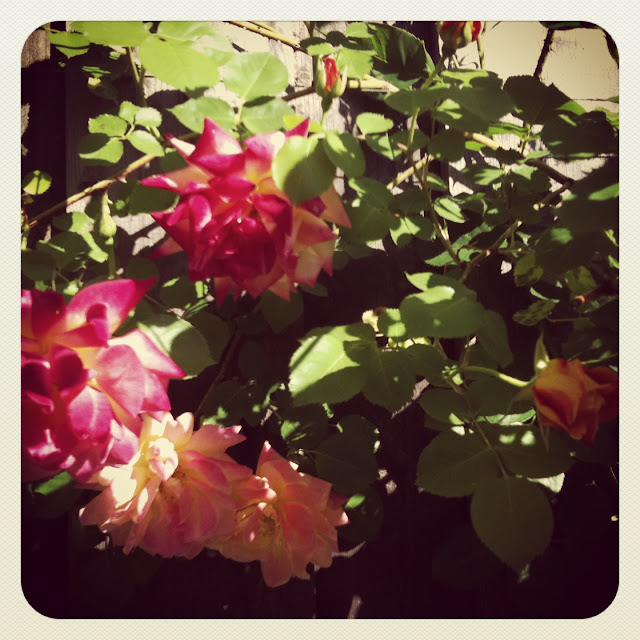 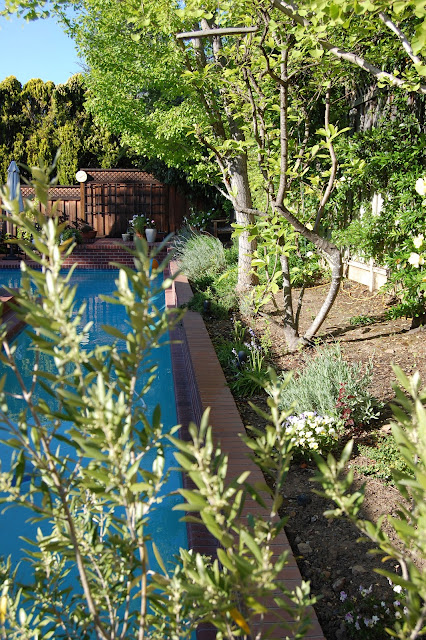 This week was their coming out and last week, our Wisteria. The Wisteria was brutally, “trimmed,” (and I use that in the lightest of terms- it was basically hacked machete style) by rogue lawn guys parading as ones who knew what they were doing last year. The result was almost no blooms last Spring, which was so awful. 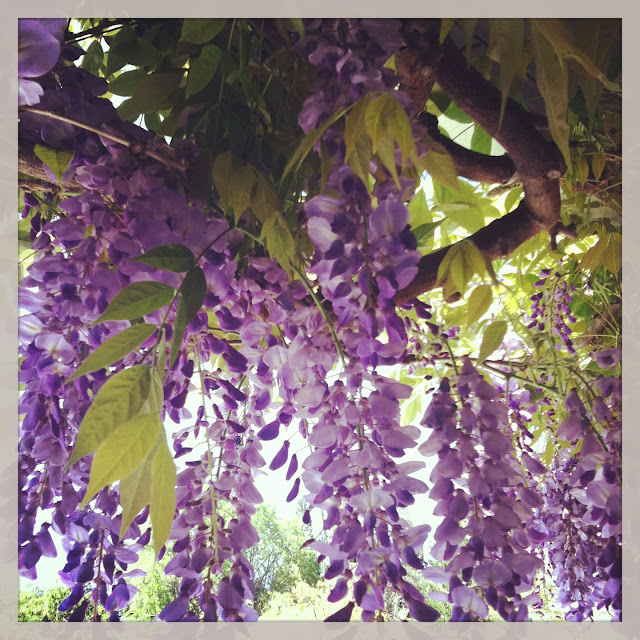 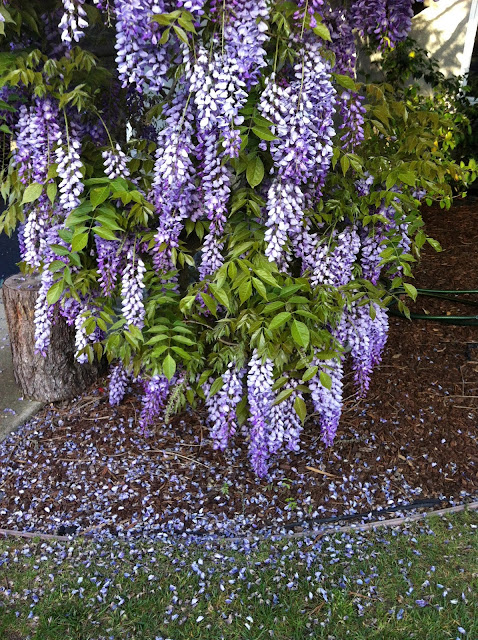 This year I took charge and it came back in all it’s glory thank goodness. I also started my garden thanks to help from my dad and my sugar snap peas, lettuce, carrots and radishes are on the way. This warm Spring has helped. 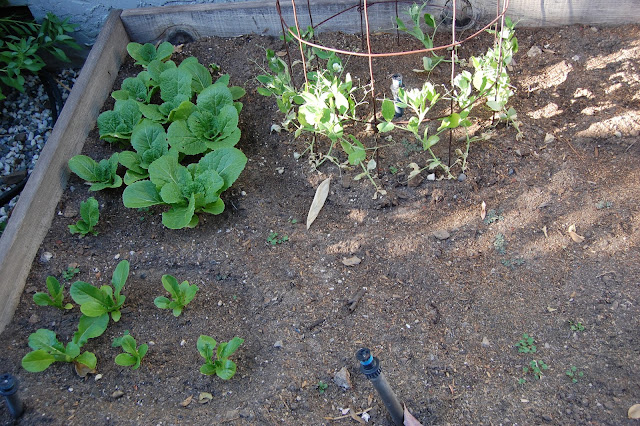 I even shuffled the kitchen a bit and decided I’d rather have my dry goods out on the counter in random jars than back in the pantry in plastics. It’s making baking and cooking easier by being right there.  Plus I like the open pantry and kitchen look right now and it feels a bit fresher. 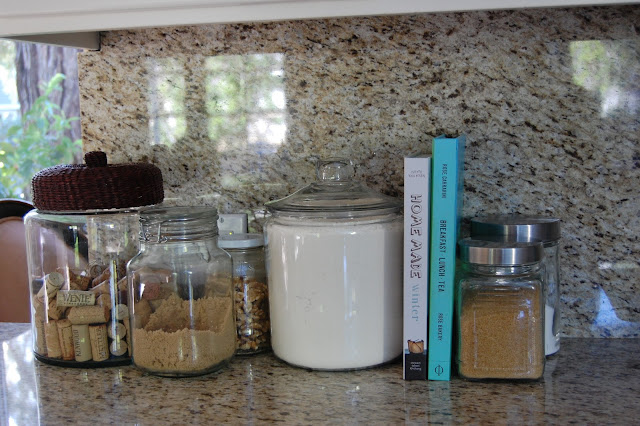 And on a totally unrelated note, duck pairs are out in full force! This couple was second of many I have seen this week. The mallards are everywhere waddling around and it’s sweet. 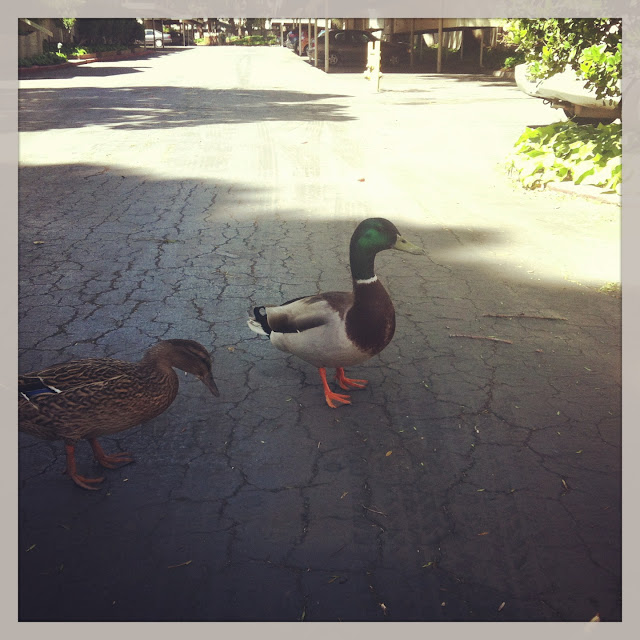 Tomorrow we will venture out to Monterey for a night getaway for the kids at The Clement on Cannery Row. We will probably have a picnic at the beach and wander around the town of Carmel-by-th-Sea. It’s a quite different from Carmel Valley and I can’t wait to write a little post about it and share my favorite stops. 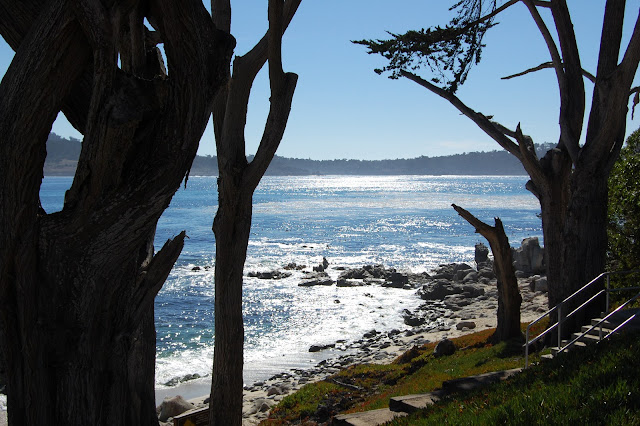 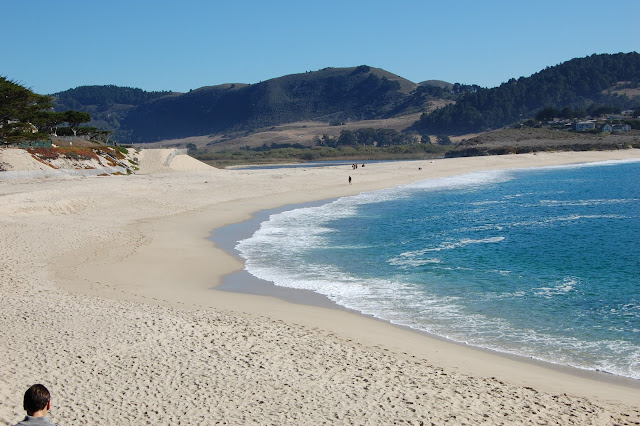 I hope you have all had a good week. I know many of you are on getaways and I look forward to hearing all about them.

The gun vote this week really got me down, Also, I can’t stop thinking of Boston and all the innocent people hurt by that horrible tragedy. I’m also thinking of the bravery and kindness of those who helped to save many lives. There’s so much goodness in so many people. Try and remember that.

Sending you all some California Sun. xx 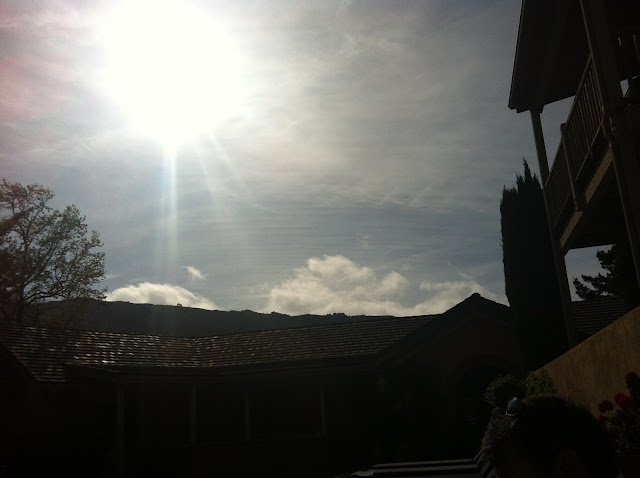