What a crazy night. La La Land won the most Oscars tonight and Moonlight won the Best Picture, but only after Warren Beatty who had the wrong card read, ‘La La Land.’ The question on everyone’s mind was why didn’t he and Faye Dunaway, his co-presenter, say they had the wrong card as it was for Best Actress?  Secondly, why didn’t someone behind the scenes who knew the real winner quickly speak up? There was a good amount of time between when the winner was read and all those involved with the La La Land rushing up on stage. Then to make matters worse they let them go on for what seems now like forever with their thank you speeches. So embarrassing for them and even worse it seems to have stolen the golden moment from the Moonlight people!

Prior to this disaster, the show was a bit bland except for the moment when Moana singer Auli’i Cravalho got whacked in the head by a dancer’s flag. Jimmy Kimmel was fine, but definitely not hilarious. As far as legends that we look forward to seeing on Oscar shows, they had Shirley MacLaine, and no other noticeable Hollywood royalty, except for Warren and Faye. Sadly, I believe they won’t be having seniors read the important categories anymore.

On the bright side it’s something else to talk about besides Trump for a bit.

I wish I had seen Moonlight, but I haven’t been able to. I think both Annette Benning in 20th Century Women, and Taraji P Hensen in Hidden Figures should have been nominated for Best Actress as they both deserved recognition, but were not.

As far as the Red Carpet it was also a bit lacking also this year. Some pretty looks, but not a whole lot of wow factor.  I agree women can wear whatever makes them feel good, but most of these ladies pay a whole lot of money for stylists to choose what will look good on them and what to wear. Let’s see who got the most bang for their buck. 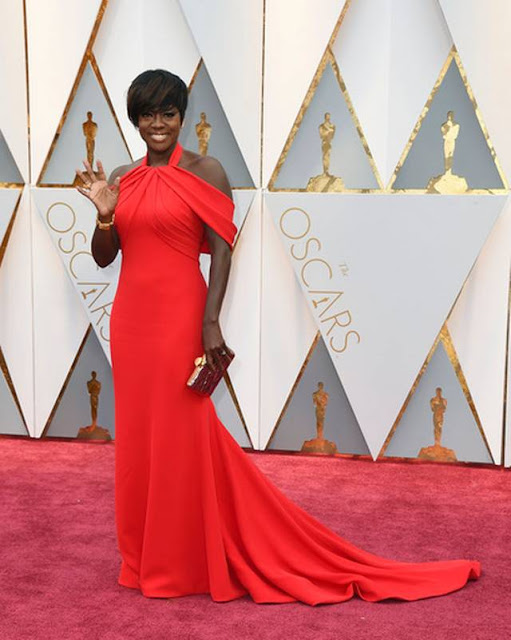 Viola Davis in Armani was winner of Best Supporting Actress and gave a lovely speech. She is a chameleon and has had so many different looks. Tonight she really was perfection with her hair, makeup and pretty earrings and clutch. 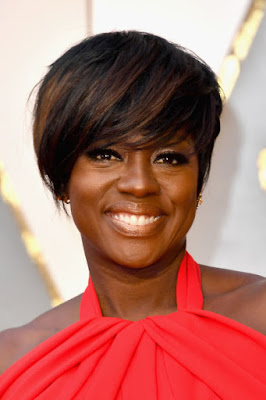 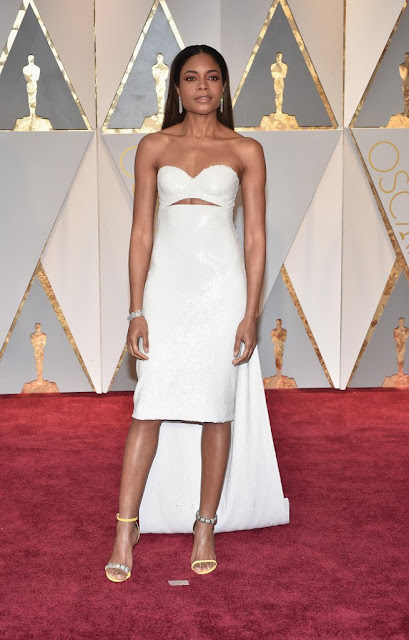 Naomi Harris played the mother in Moonlight and wore Calvin Klein. This is clean, classic and lovely and fresh. 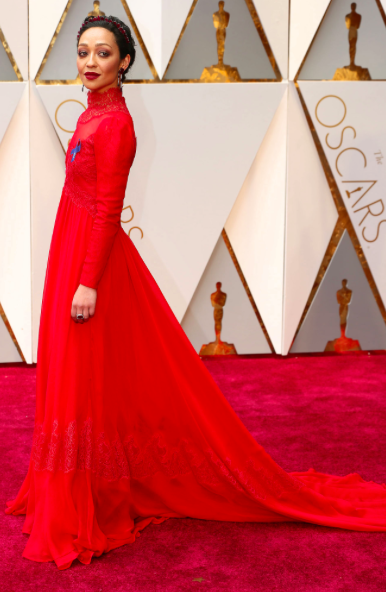 Ruth Negga’s Victorian inspired Valentino was different and pretty. She also wore a blue ribbon in support of the ACLU as did many others.  Loving is on my list of films to see. 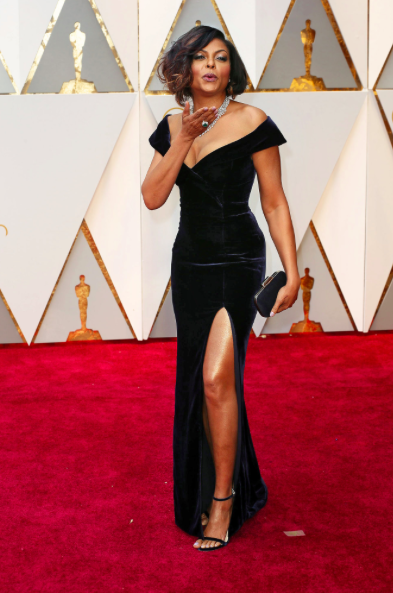 Taraji P Hensen has great style and in Alberta Ferretti was gorgeous on her. 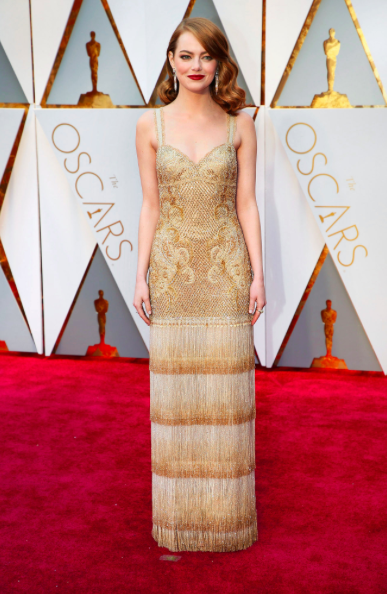 Emma Stone had her Cinderella moment last night winning Best Actress and she was also the first winner to wear Givenchy since Audrey Hepburn. I loved everything about her look including the makeup and hair shown better in the Instagram by Rachel Goodwin her makeup person. 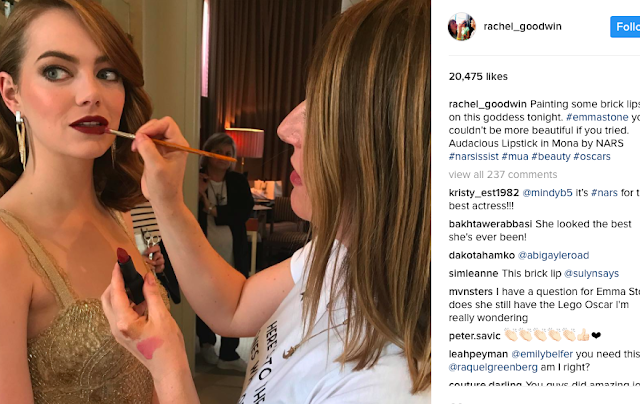 Jessica Biel’s Kaufman Franco gold sheath which was even prettier in person and her minimal hair and fabulous Tiffany necklace were the perfect complement. 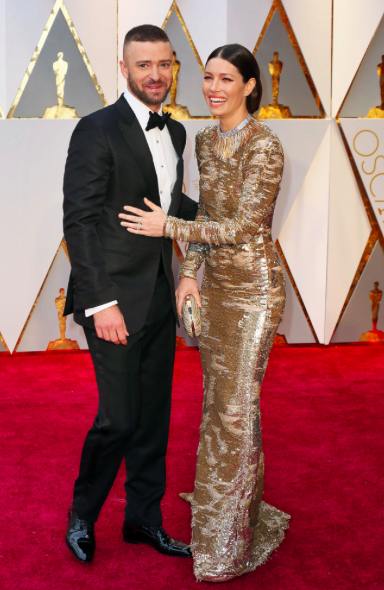 With her husband Justin Timberlake who opened the show with a fun song and dance number. I’m not crazy about his hair right now. 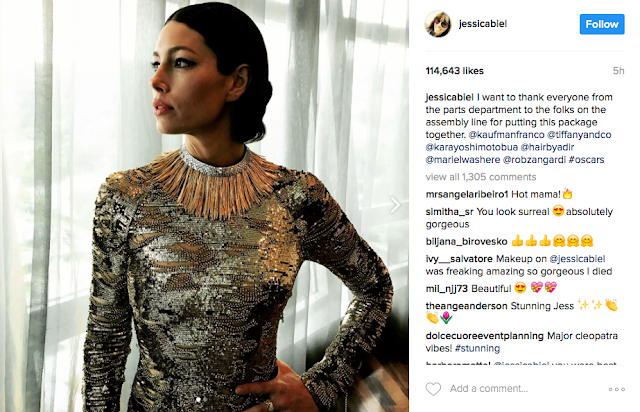 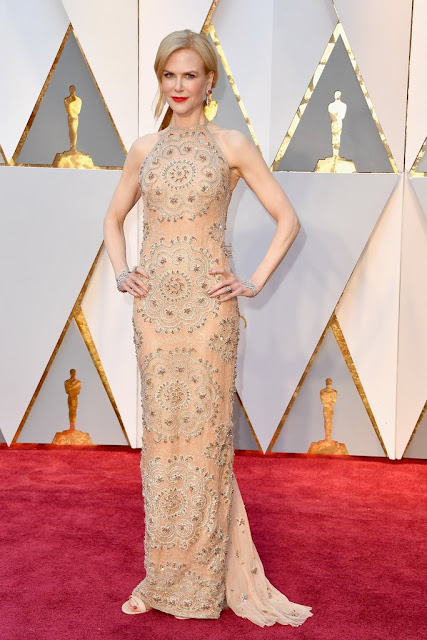 Nicole Kidman looked lovely in Armani. I do think she has a lot of face fillers. While she looks very youthful is this the look to aspire to? It’s slightly disturbing seeing some women try to stay looking 30 though they may be nearing 50. Can we look good and still look as if we are our age? Why would you want to stay looking 30 forever? Maybe it’s just me, but I’d love to see Nicole without all that stuff and I bet she’d be even lovelier.
I’m on the fence about these looks.. 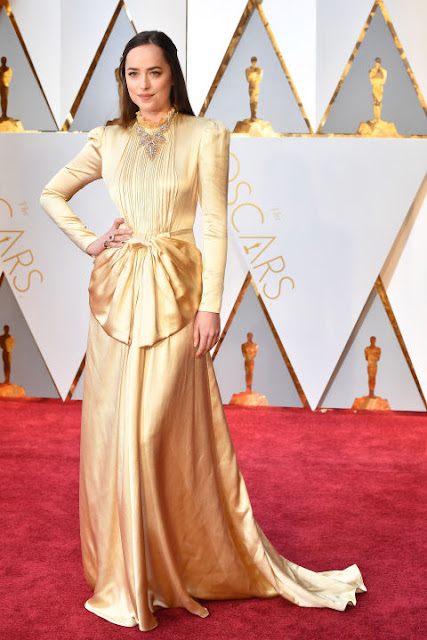 Dakota Johnson in another Victorian trend gown. What do you think? 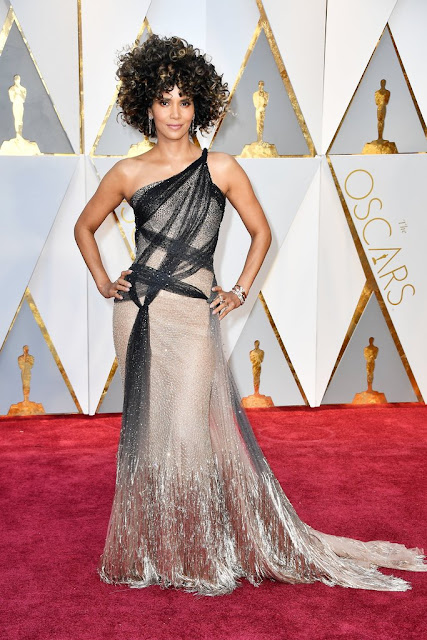 Halle has a great figure yet this dress seems to be something she’s done many times. The hair is a new look for her. 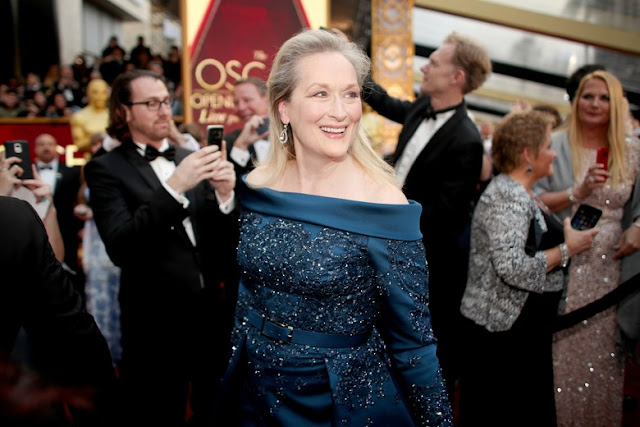 Love our Meryl, but I think she needs a stylist. I don’t think she does stylists or if she does needs a new one. She is so youthful and yet dresses frumpy. The hair and granny glasses could use a little update. I wonder what Chanel dress Karl had planned for her was. Who knows what happened with that whole fiasco, but he is a temperamental guy I’ve heard. 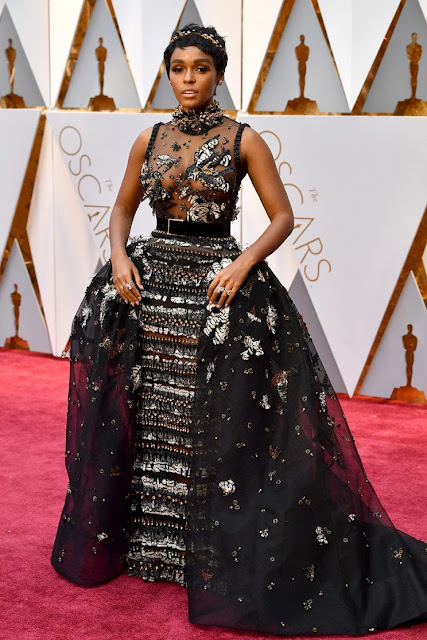 Janelle Monae is just a darling gal, but this had a lot going on with the belt and tiara to boot. 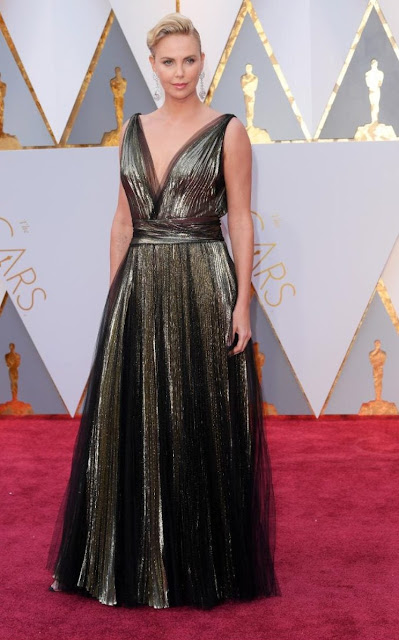 Charlize Theron wore Dior and I think the shape of this gown made her shoulders look extremely wide and her head small. Just a proportion thing, but not so flattering. 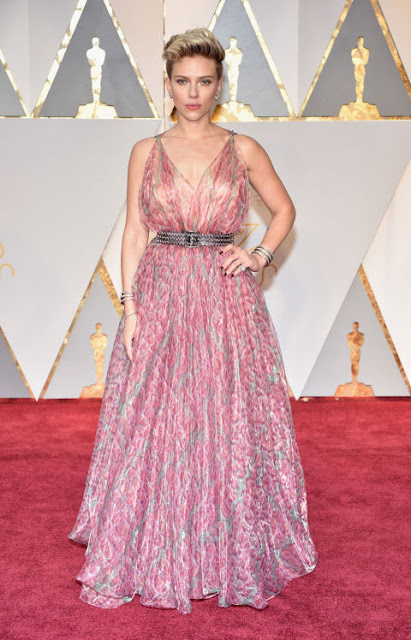 Scarlett Johansson wore Alaia and it also had some proportion problems though a beautiful fabric. The addition of the heavy metal belt did nothing for this and looked odd with this delicate dress.
Now I have to throw in Ryan Gosling. The retro ruffled dress shirt was cool though others were hating on it. I give him style points for something different plus he’s just such a nice guy. He brought his sister with him to the show and apparently everyone was tweeting about her as she was showing some serious cleavage. 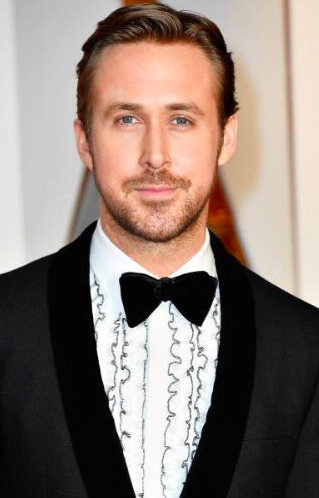 Also sweet was Dev Patel and his cute mom who was his date. 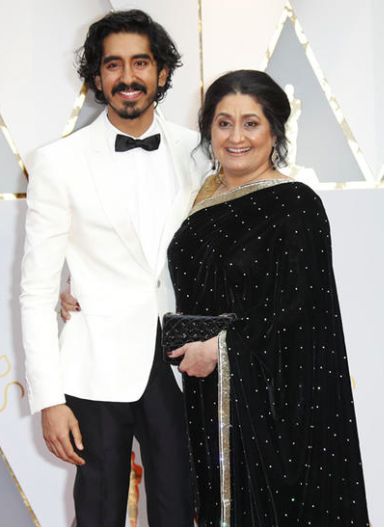 I’m crazy about Dev and he deserved an award for Lion too though Mahershala Ali, tonight’s winner for Best Supporting Actor, was also apparently fantastic in Moonlight. He’s got some great style as well. 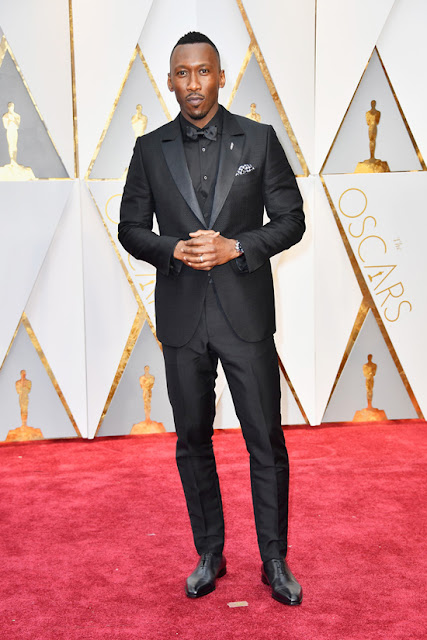 Did I miss anything? I’d love to know your favorite dresses, least favorite looks, what you thought of the show and this year’s films. Let’s share!
Kim
photos via Pinterest, NYTimes

Do you wear red? ❤️How do you feel about addin

Spring has sprung in San Francisco with the plum t

The weekend post is up and there’s a few Valenti