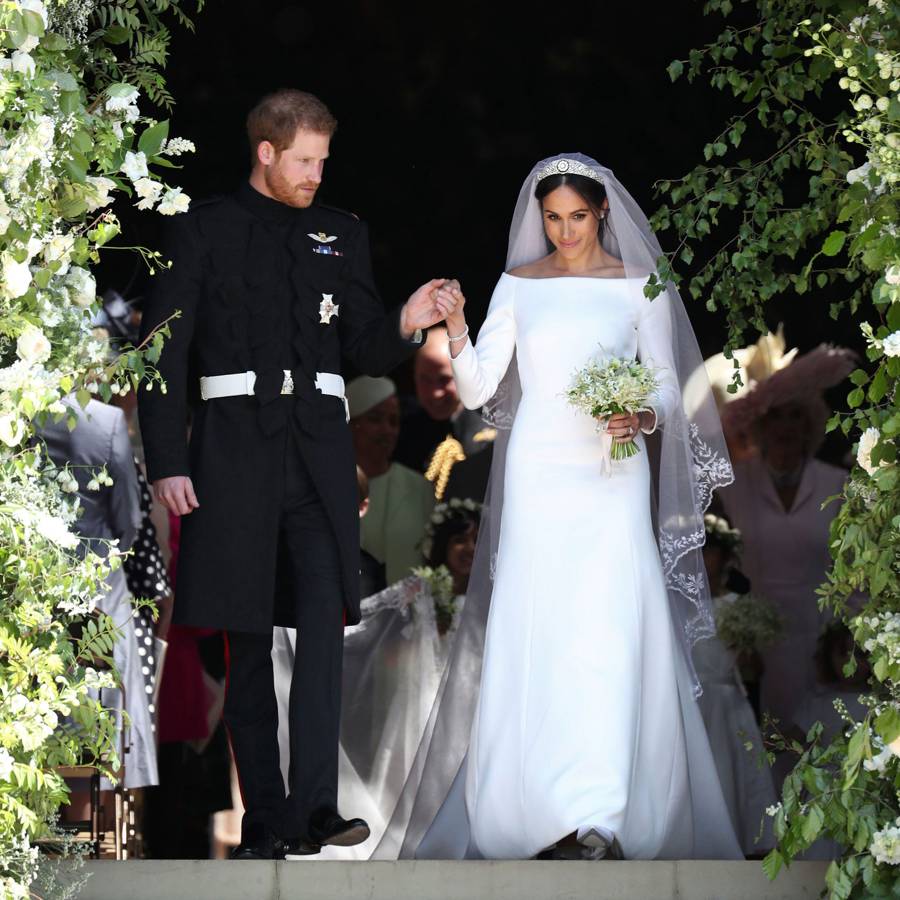 Saturday …what a positive and happy day for the world with this wedding of Harry and our gal Meghan. I just can’t help chatting more about about it.  I don’t want it to all be over! 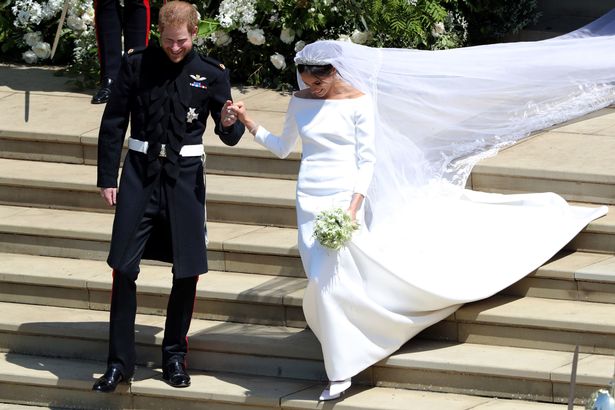 What did you think of the dress made by an English designer Clare Waight Keller for Givenchy?I though it was so Givenchy –  very Audrey Hepburn looking and very Meghan’s style as well. The simplicity really showed off her elegant shape and the beautiful veil was romantic and lovely. The veil was embroidered with the flowers of the Commonwealth countries and even California Poppies, as a nod to Meghan’s home. 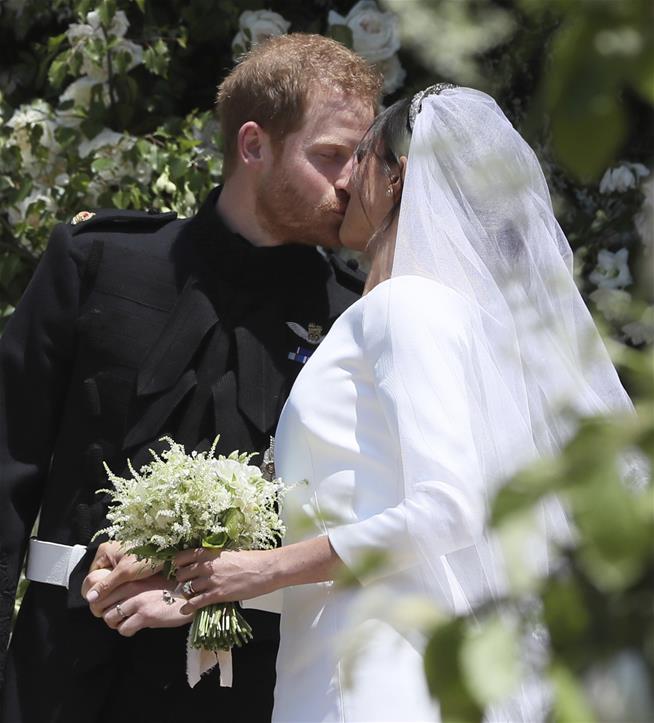 Wowsers. No doubt they are in love! So fun to be a part of the happiness that Harry has finally found after everything with his mom and some depression he has battled.

The Queen Mary tiara Meghan chose was also modern as tiaras go and it seemed to match the style of dress well. Oh to be there and see all the tiaras that were in the running from the royal collection!  I personally love Diana’s Spencer family tiara, but it would have been too fussy. This was just right. All the lines were kept simple and even her makeup looked natural and lovely. 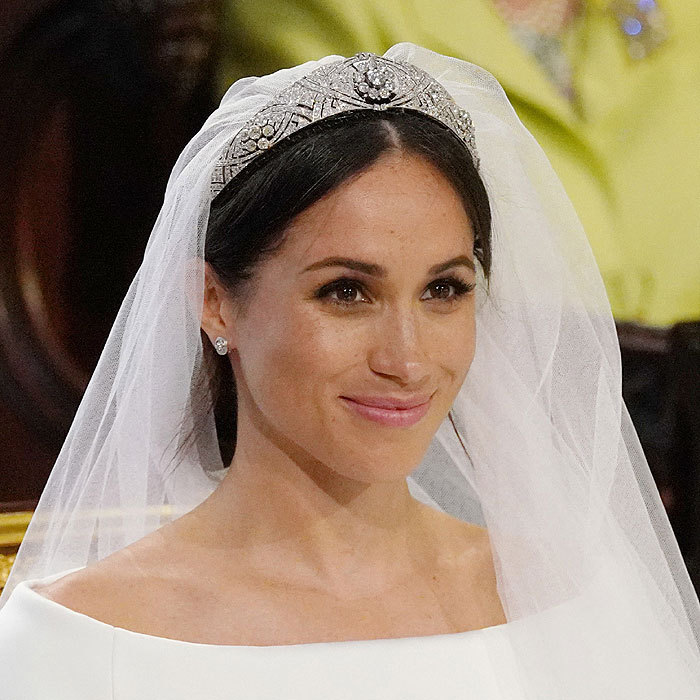 Meghan is 36 and knows her own style and it shows. She’s true to what she likes and isn’t afraid to do as she pleases. This is so different from Diana who was 36 when she died, (shocking to me they are the same ages), and 19 when she wed. It took Diana a long time to get to that more assertive age and she was just coming into her own when she died I think. 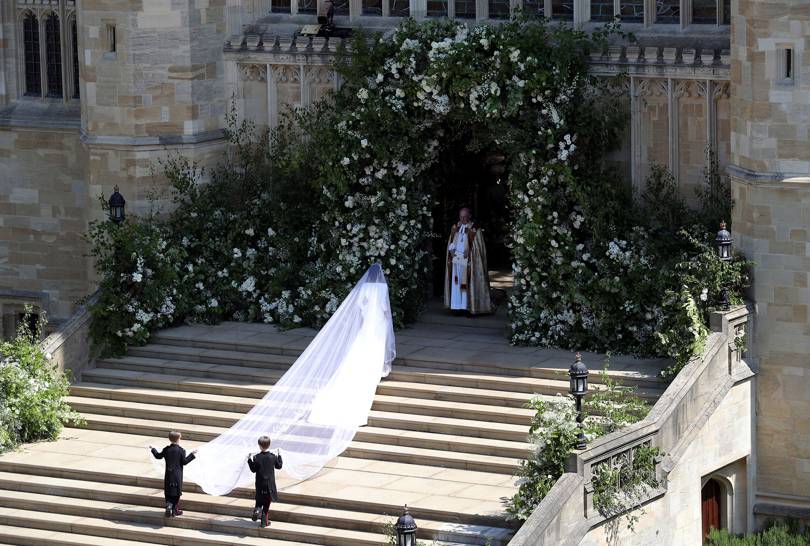 The venue of St George’s was absolutely gorgeous! The floral arches at the entrance and inside the church were beautiful. I loved Meghan’s small bouquet of Harry’s mother’s favorite flower- Forget Me Nots. I also just read that Harry wanted a seat left empty next to William for his mother Diana. That choked me up. I felt very emotional during many moments. Harry is such a sweet, sensitive man who I think we all are rooting for. 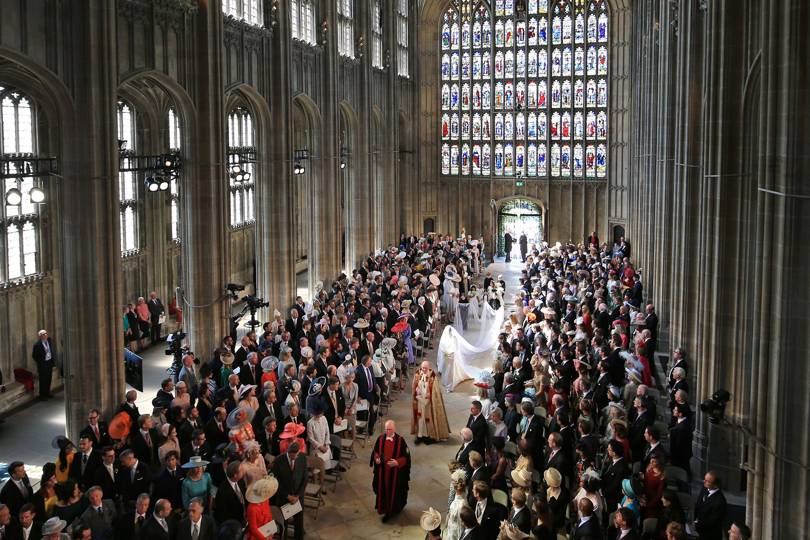 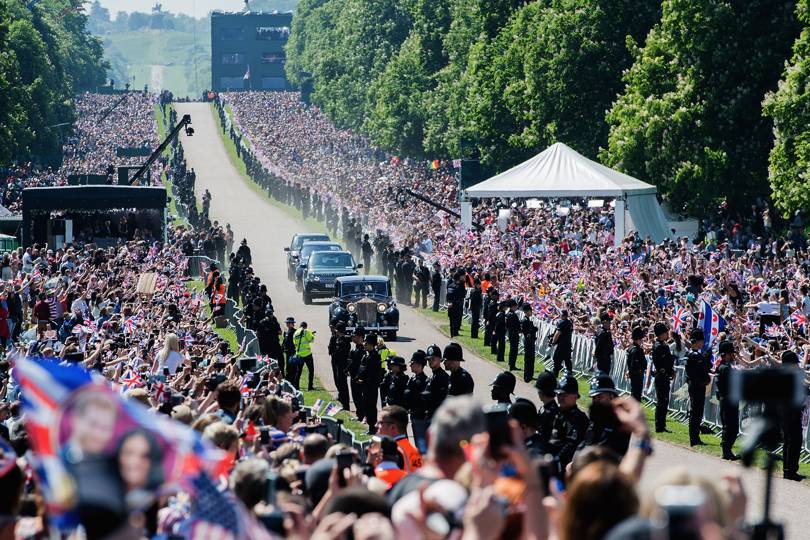 They think at least 100,00 people came to be a part of this special day in Windsor.

Meghan’s mom Doria Ragland in what the NYTimes called a pea shoot green suit from Oscar de la Renta. She was perfect and modern and one couldn’t help, but feel for her sitting all alone so far from home. I see why everyone loves her. Just watching her during the service she exuded a calm and grace, though blinked back tears during many parts. I loved her natural braids and even her nose ring. She is real and relatable this yoga teacher and charity worker. 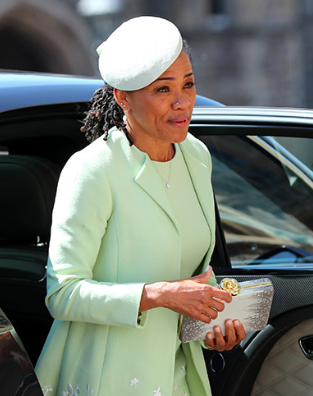 The delight on the face of the little pageboy holding Meghan’s train as he heard the trumpets ring walking into the church was one especially memorable part. 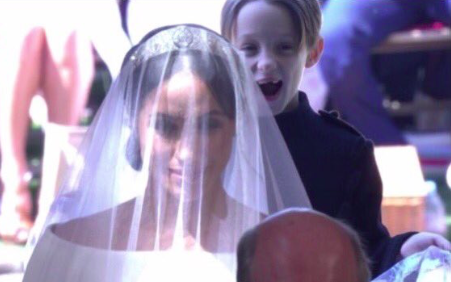 The kids were too cute!

Charlotte with her mom. She later stuck her tongue out at everyone while leaving!! 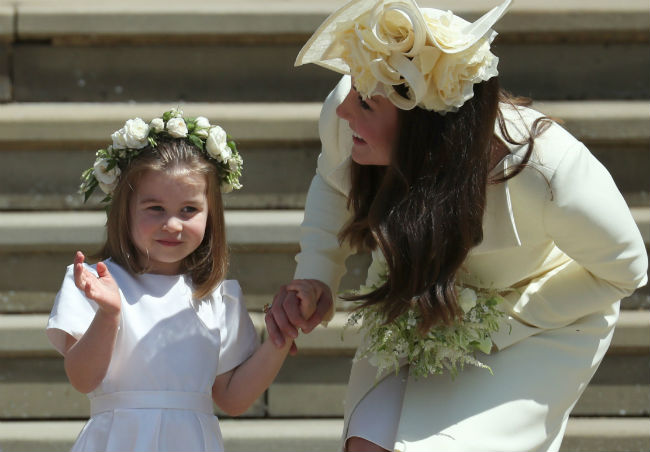 George in a mini version of his uncles’ suit. She’s more cheeky like Harry was as a boy and George is quite serious! 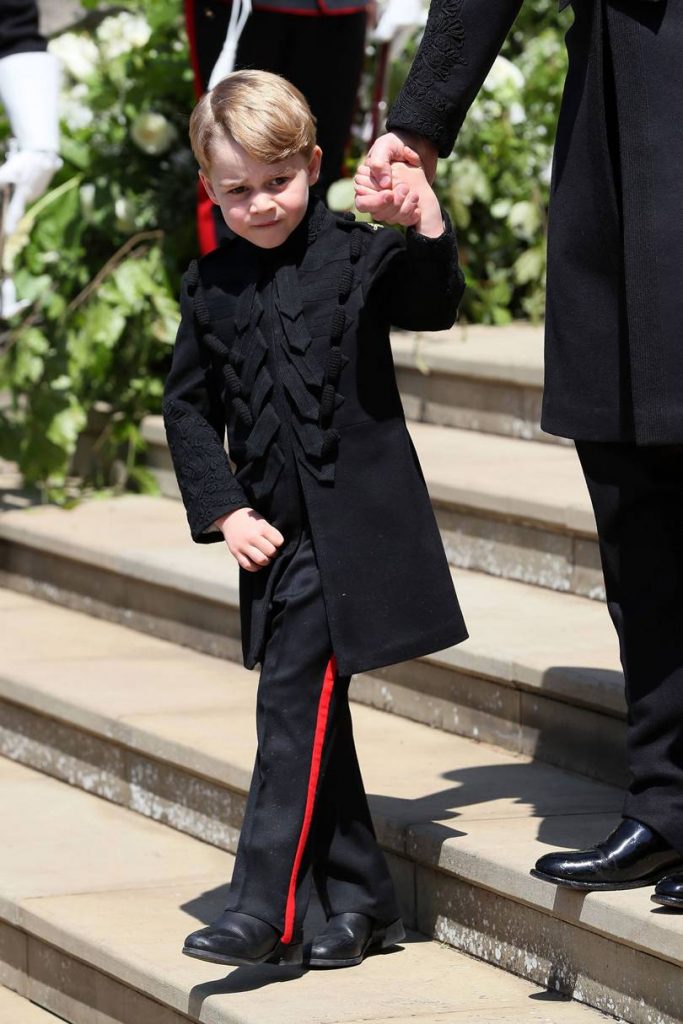 Harry’s face as he met Meghan at the alter. Those who read lips said he said, ‘I am the luckiest guy in the world.’  Someone commentating said find someone who looks at you like Harry looks at Meghan. I have to agree!

The cello player was only 19 and amazing. (I may be biased as I have my own cello playing teenager at home.)  He and his music were a treat. The British group, Kingdom Gospel Choir was was so cool in their pale blush dresses and blue suits and their rendition of ‘Stand by Me,’ was just right. 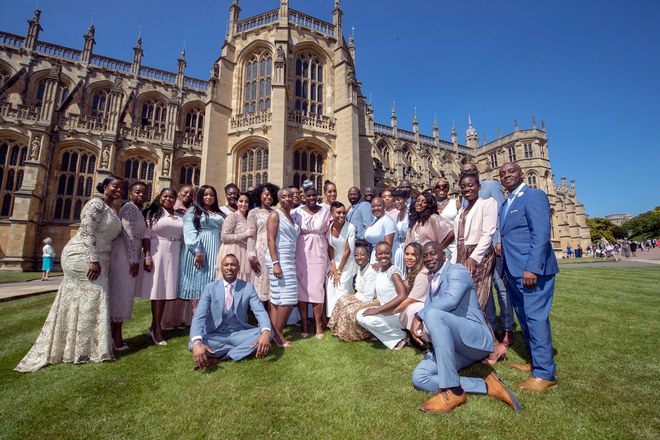 How stylish were the guests? I LOVED seeing everyone walk in. I’m digging all the longer dresses we are seeing now, almost tea style and 1930’s shapes. It’s a look is perfect for a day wedding and flatters so many. The hats and fascinators are always exuberant and it made me wish we wore them here in the states more. We are missing out on so much fun! Who can have a bad time in a fascinator? You feel a bit saucy in them! 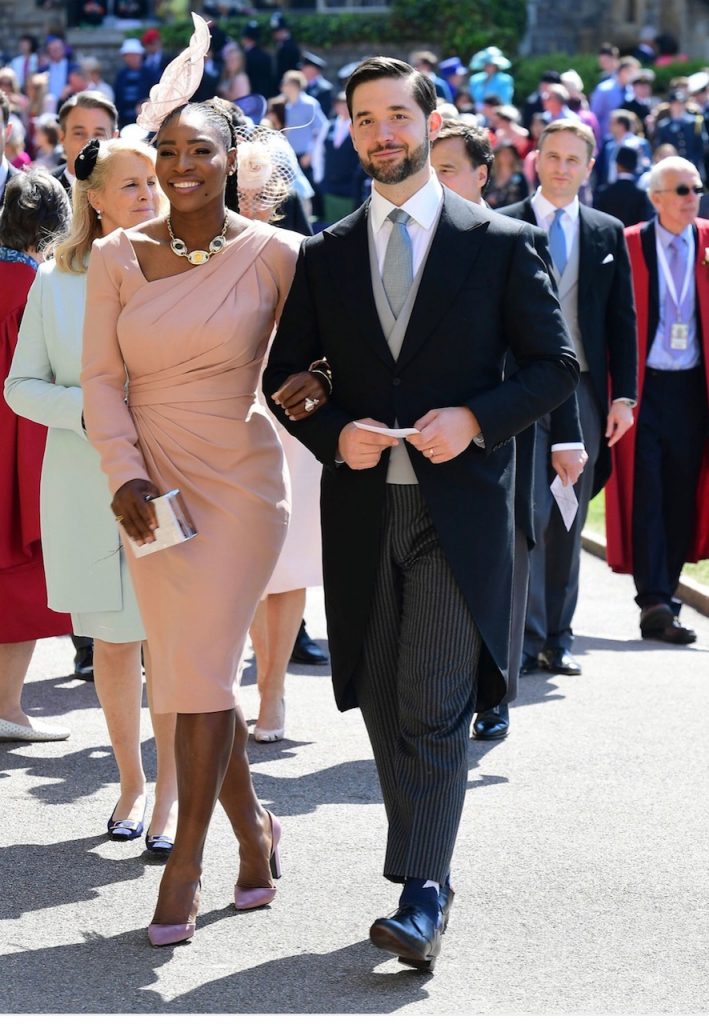 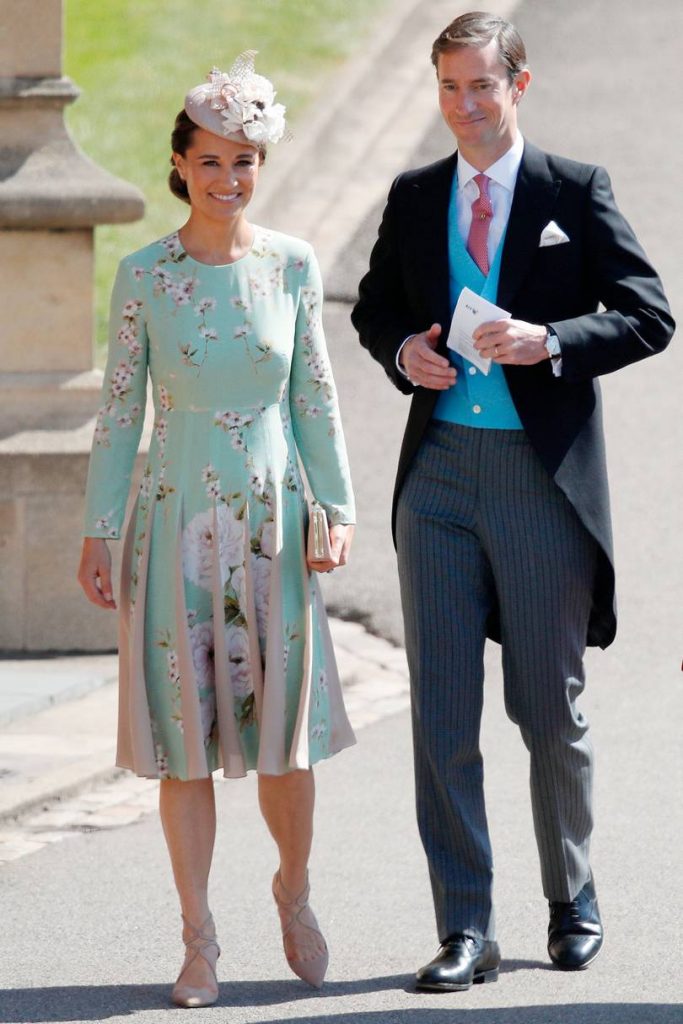 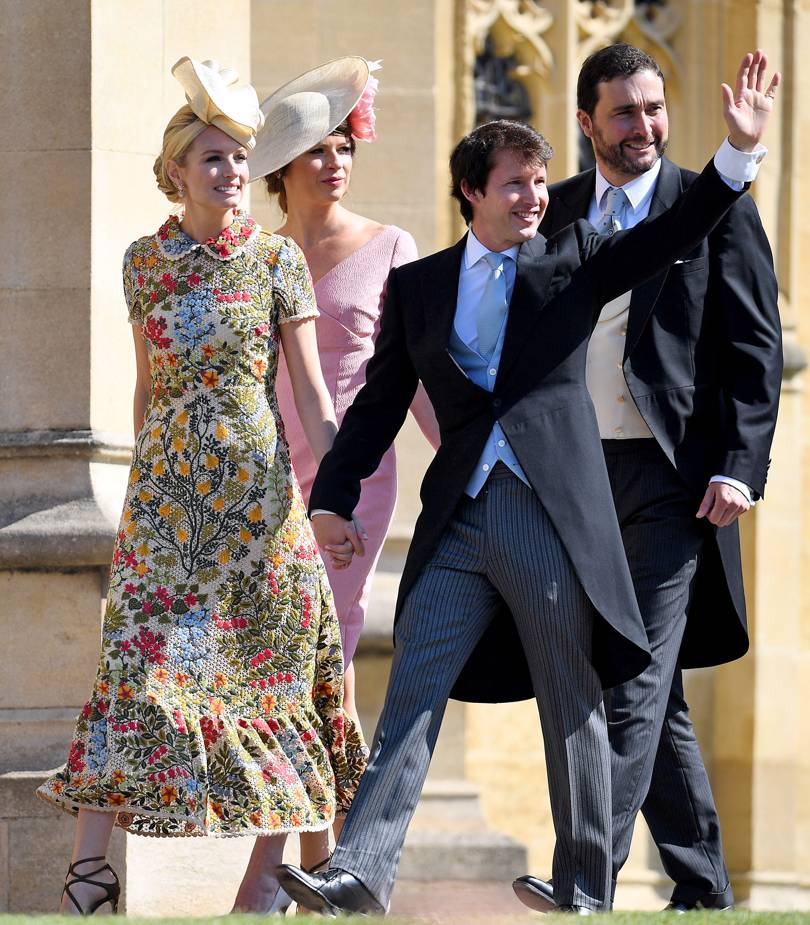 How about the evening reception dress? Another simple yet luxurious concoction this time from Stella McCartney. This was so chic, especially with the addition of an aquamarine ring of Dianas on her finger.  They got into that Jaguar and wow! 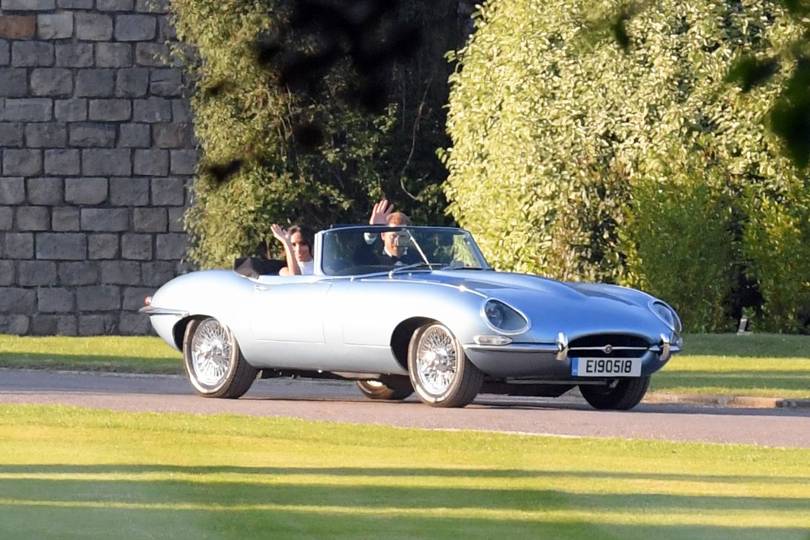 Meghan really looks pretty in white. I love that she has unfussy, classic and clean American style. This new duchess is going to do us proud no doubt in her style and in her activism! I’m looking forward to seeing her evolve in her new role. 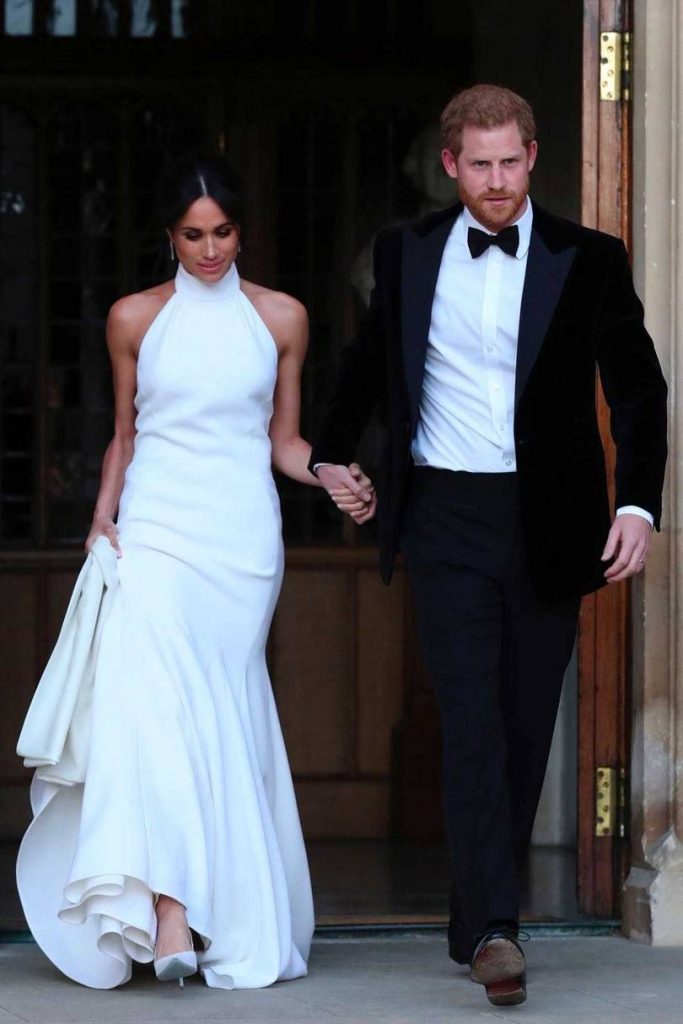 Doesn’t Harry look all James Bond here? He really has become so much more dashing as he has aged. I loved this halter style for the evening reception.

Going in the electric Jaguar wearing his mom’s aquamarine ring they think he gifted her. 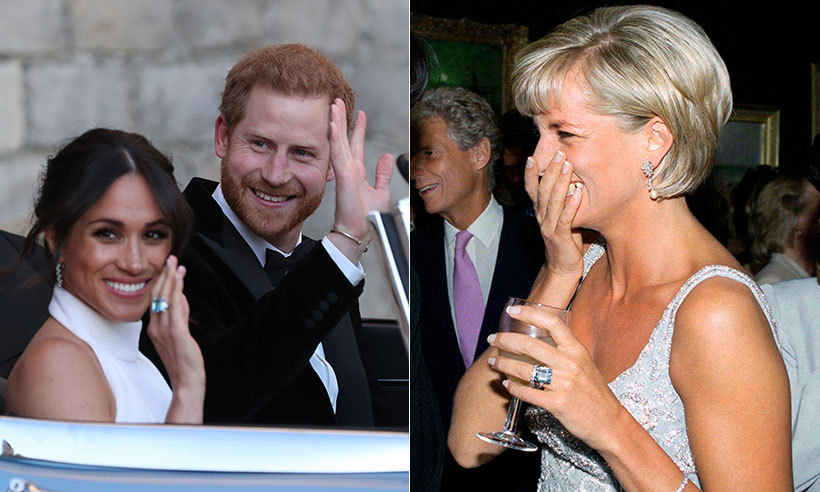 Bishop Michael Curry gave a very American style sermon on the power of love and I found him refreshing, honest and just what we need to hear right now. He may have gotten a little off track on the fire part, but he was not too scripted or polished and I think that made him even more likable. His message that love can heal the world is not heard enough. His full sermon here. I think of Princess Diana who said the world needs more love. She would have been so proud of this ceremony and Harry.

Were you as enchanted as I was? To me it was a most happy day of hope we sorely needed.

How many of you got up to see it live? I got up around 5 and started the replay. I had friends over from the neighborhood and a few others who were up for putting on a hat and eating a few scones in honor of this American-British marriage! It was great dishing all the details together. 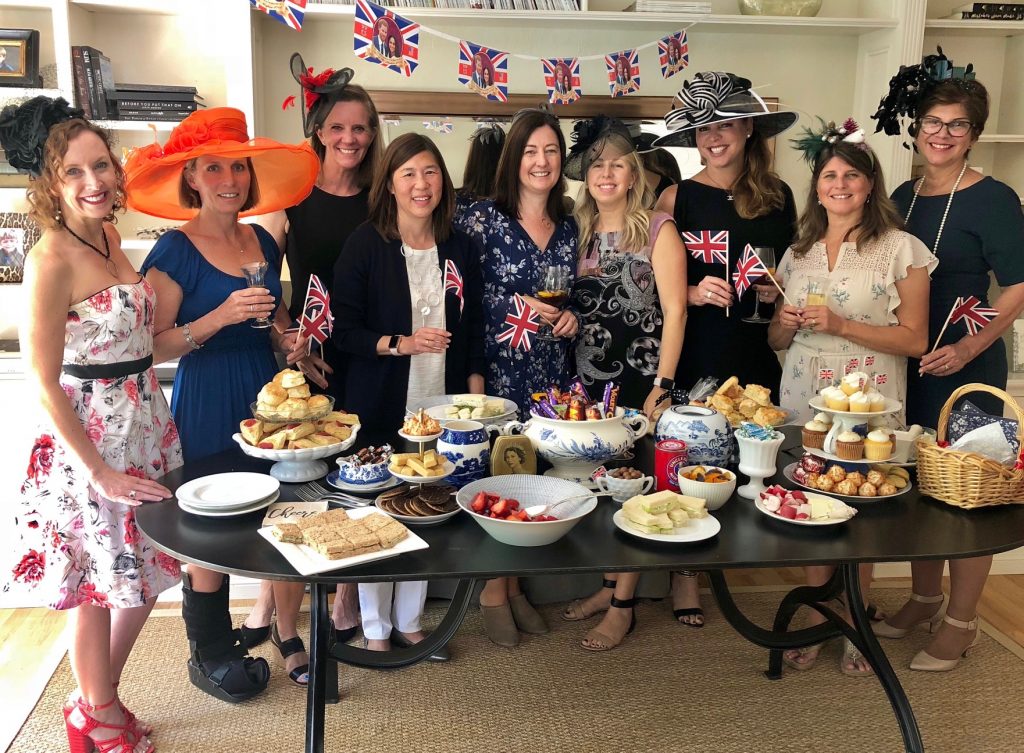 Happy Friday! Alert this is not a Reel, but here g

Have you made a persimmon salad yet??Last night wa