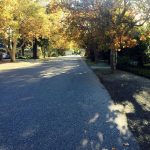 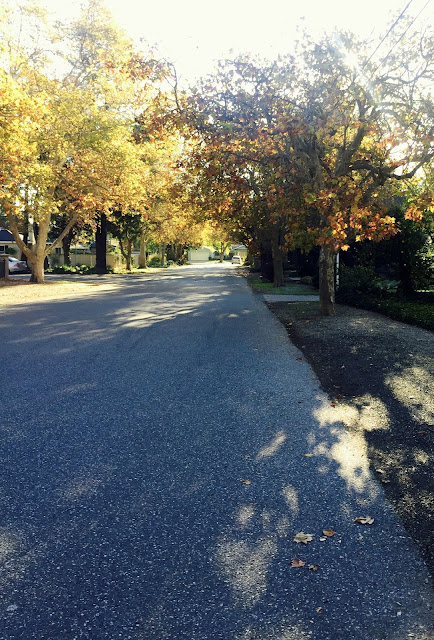 I just couldn’t survive this week without coming together here on this blog with you all. It’s been a tough week and to chat about home remodeling right now seems pretty lame.

You probably suspected and rightly so, as the title of this blog alludes to, I am a Northern Californian through and through and yes I am liberal. I grew up among free-thinkers, hippies and a lot of what we call ‘granolas’ here. Old word now! I had moderate, but open-minded parents. One thing I got from them was acceptance of everyone, and always do onto others, be the best person you can be, read, be informed and be kind.  I have voted both Republican and Democrat in my life. I try always to see both sides.

This week …I just can’t. I truly felt an excitement and elation about actually having the first woman president. This woman did her homework, spent her life doing right and was the most overqualified and experienced candidate ever- man or woman. The Facebook group Pantsuit Nation got me even more energized hearing the stories of -men, women, children, old folks, immigrants, all sharing their hope for this woman president. We were ready to make history and see the world change together.

Well it was not to be.

Tuesday night I was feeling sick to my stomach by 7 p.m. I had to turn of the PBS Newshour as I could see it on their faces. It wasn’t good. I went to bed fearful and woke up afraid to get out of bed. I wanted so badly to see this woman elected president. I wanted it for my mother who always admired Hilary and told me women can do anything. I wanted it for my 99 year old grandmother who said,’ It’s her time honey, she will do it.’ I wanted this for the little girls of the world and the big girls too. I wanted it for the young women in college who have dreams. I wanted it for women who have sweated and suffered through so much to give their families a decent life. I wanted it for my sons so they could live in a country where a woman was the leader of the free world. We were ready for that ceiling to shatter. I can’t write this without crying. It has broken my heart. I could barely get out of bed. My college freshman son texted me, ‘Mom I just can’t believe it.’ What to say to him?

I think what has made this loss even more painful is the winner is someone who has openly disrespected women, belittled us, and possibly even assaulted us. The class bully was chosen over the girl who did her homework. The bully cheated his way through class too.

How my fellow Americans, especially women, could choose this man to be our president is incomprehensible to so many of us. Yesterday my phone literally blew up with messages of despair from friends far and near. What will happen to us now?

I got up anyway, showered, put on my Hillary T-shirt and made my way to the grocery store. I thought dammit he may of won, but I’m wearing my Hillary T-shirt anyway. At least three women came up to me wanting to talk about the election. One older woman walked by and said, ‘I cried all day yesterday.’ It was comforting to know others felt the same.

A few friends called for an emergency glass of wine to commiserate. After expressing our shock, and real hope that Trump will not be the evil person he promises to be, we made a plan. We want to gather monthly to raise funds for women’s and other causes, to share articles and books, and to educate those who are uninformed about women’s rights and other rights that may be in jeopardy of going away.

One of the things we all need to understand is there is a very big section of this country that feels disenfranchised and left out. Those are the poorer, the people out of work, those less fortunate and who have no hope to gain traction in a society that is now very have/ have nots. We have lost the middle class in this country. People are wealthy or they are edging on destitution. Those are the people who voted in record numbers for Trump, if only to grasp at straws it seems. Why they couldn’t see his plans do nothing for the poor says how desperate they feel. We need to not leave these folks behind. We are together in this. They want to be heard and now hopefully will be.

There is also another group who has a different wish, to make America white again. Those people spewed their hate in record numbers the day after the election and think it’s open season on Americans of different ethnicities and color and sexual orientation. The Twitter feed called Day 1 in Trump’s America is just sickening. Apparently these people were just waiting to release the hate they’ve previously kept inside as open bigotry and racism is something we frown on in the America I grew up in. One of the saddest effects yet of this election and one we must not tolerate in the smallest form. This almost made me more ill than the election results.

Now friends, as Ghandi said, ‘Be the change you want to see in the world.’

We women will commiserate, be sad and then many of us will go back to what we always do- taking care of our families and putting their needs first. However, the best thing we can do for our kids and our communities is change the world for better.

Gather a group if you can. Plan to make a difference if only through talking, sharing ideas, educating ourselves, our daughters, sons and our friends.  By donating to causes for change we can help mobilize opposition if Trump follows through on his promises to nominate supreme court justices to overturn Roe vs. Wade. As women we also care deeply about the planet and Trump’s other pledges to end clean air initiatives, to not follow through on our NATO promises, overturn gun reforms are equally as scary and worth action on.

Most of all, we have a responsibility to our kids to show what kind of people we want them to grow up to be. Whether they are in preschool or college, we want them to be the face of a kinder, more inclusive world. The more divisiveness we hear, the more we need to remind them we are not those kind of people. Together we are stronger. We have to love each other to love this country. We should not want to go backward, but accept change, progress, science and immigration, and diversity- things our country was founded on. I love this note from a thoughtful father to his son: 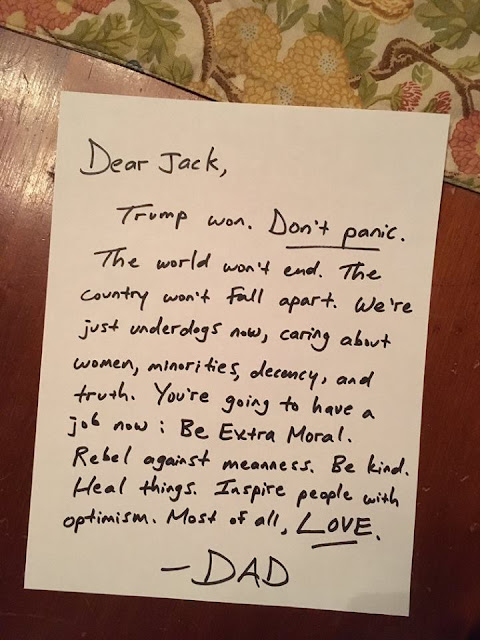 Kinda says it all doesn’t it? (via Dennis Mahoney Facebook)

Do not despair and do not hate our friends. We must change the world and this has only given us more fuel. This election has shown us we still exist in a very patriarchal society and the old boy’s club is going strong. Let’s work to smash that glass ceiling with all of us, men included and hopefully our conservative friends will join too. I know so many of them did in this election and I love them for it.

I leave you this which is ever present on my mind: 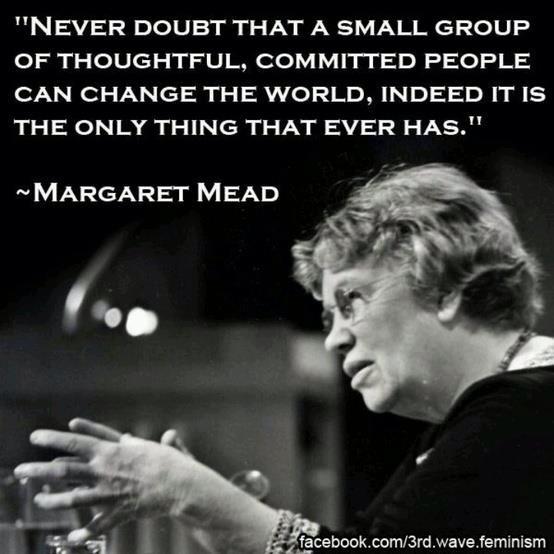 That’s us guys! Lets get to work.

Thanks for listening and being here friends. I love you guys.

Please feel free to share your thoughts. I don’t want to hate, but to inspire hope and more change.

A great site in helping bring about change- The Representation Project

A petition to change the electoral college

Causes I am donating to this week: