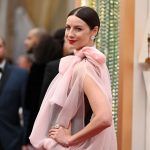 It’s that time again friends. Grab a latte and let’s dish on all things Oscar!! I have to say I wasn’t so excited about this Oscars because the film selections seem less exciting every year. That said I did love Judy, Little Women, 1917, and Ford vs. Ferarri and sort of Jojo Rabbit. I have yet to see Harriet or Parasite and a few others. I don’t do violent films like The Joker. Still it’s always good fun to watch the show and have some frivolous stuff to get worked up about with the past few weeks of politics right?

The kick off with Janelle Monae was exuberant. This gal is so talented. Here she is with Billy Porter.

Let me just start by saying the Red Carpet pre-show by ABC sucked. Billy Porter and the other gal, Lilly Aldridge were just awful interviewers, and Billy, dressed to the nines himself, knew squat about clothes. He didn’t know what a peplum was or what to call ruffles and called Billy Eilish’s Chanel outfit with a zillion CCs a Gucci, so the man needs to be reassigned to the after-parties or something. I suppose I should have changed over to the E channel for the pre-show, but I am not sure what’s up over there now without the Fashion Police. Things are very PC now and it’s kind of boring. You could tell the interviewers were so careful not to ask who the designers were and focus on the actor’s accomplishments, but on the red carpet we really want the fabulous fashion facts, no?

The show felt like it lacked continuity without a presenter. It also was missing some lightness and humor that comes with a spot of comic relief. Chris Rock and Steve Martin, came out in the beginning, should have done the whole show. Thanks to no presenters, many of the musicians weren’t even introduced at points and no names appeared on screen, so it was odd. I had no idea who some folks were. Did anyone else feel that too?

One cute thing was a song with all those who voiced Elsa in film versions around the world, which was original and a treat. Eminem also made a surprise performance. The musical parts were all exceptional I thought.

Other good moment were when Diane Keaton and Keanu Reeves rekindled their onscreen flirtation from Something’s Gotta Give. She was authentically Diane in her checked ensemble. I loved her black rings and nails. He is ADORABLE as ever… and likes older gals. Could this be sequel? I know a lot of people who would see another Nancy Myers’ film with them!

I was glad to see Renee Zellweger win for Best Actress. The Judy movie was one of the best I have seen in the last year and she really was fantastic. Her singing was very good and I’m surprised they didn’t have her sing one of Judy’s songs from the film.

I loved her simple elegant look.

My favorite look was Penelope Cruz in vintage Chanel!! She looks amazing close up so natural. This dress had pockets. This spot where they take pics is overlit and they all look better in the actual theatre.

Other favorites for me were Brie Larson… This was Celine.

I like this trend of almost naked makeup and less or no jewelry. Gorgeous up close.

I also thought Regina King was beautiful. Loved this dress.

Charlize in Dior was stunning.

Cynthia Erivo’s dress was also really special. This woman is so darn talented starring as Harriet Tubman and she sang the most beautiful song from the film last night. I had no idea about her and I can’t wait to see Harriet.

Zazie Beetz dress was shorter, but I love this look!

Caitriona Balfe was in Ford vs. Ferrari, but I know her from Outlander so I was thrilled to see her on the Red Carpet. Her fashion sense is very dramatic and this was Valentino. Loved it. Are any of you Outlander fans? I can’t wait for the new season next week!

Brad Pitt…So happy to see him get an Oscar for acting. He’s like an old boyfriend you haven’t seen for ages, but darn, still appealing. I think he’s coming into his own. I like his look here- totally Brad, no artifice there.

Mindy Kaling really lovely in this gorgeous yellow. This necklace was a real one from the Ocean’s movie. She had an armed guard stay outside of her home last night to protect it. She didn’t want to know its real value (in the millions), as she said she’d be too nervous wearing it.

Geena Davis – another cool dress with pockets. Geena received the humanitarian award as she is the founder of the Geena Davis Institute on Gender in Media which works to avoid gender bias and stereotypes of female characters aimed at kids. (Wow. ) She also works at the United Nations and was a chair on the California Commission on the status of women. That’s just a little of what she does!

I thought this gold frock on Scottish writer Krysty Wilson-Cairns, who wrote the screenplay for 1917, was beautiful.

Mark Ruffalo and his wife Sunrise Coigney make a elegant couple. I adore Mark and all he does for climate change. You can follow Mark here on Instagram.

I think Rebel Wilson was great in Jojo Rabbit and I liked this old Hollywood look so much on her.

Not sure this was her best look, but the green on Greta Gerwig’s gown is very pretty. I would have gone with no necklace here and some long dark gloves and drop earrings.

Janelle Monae in a specially made Ralph Lauren. Up close this was amazing.

I just adore this gal Beanie Feldstein from Booksmart so much. She looks cute.

Gal Godot’s Givenchy gown was dreamy. I don’t think it needed the necklace at all.

Natalie Portman’s gown had a cape with the name of those women director’s who were not nominated embroidered on the trim.

Best Actress winner Laura Dern with her mom Diane Ladd. Sweet. I have to see the Marriage Story too. I’m really behind.

Jane Fonda killing it at 82. This woman just keeps going and is currently a climate warrior. Her life revolves around fixing climate change now according to an article in the new Vogue. So inspiring.

These two dapper guys, George MacKay and Dean-Charles Chapman were the stars of 1917 and what a film. Please see it if you haven’t. They both should have been nominated.

This little gal, Julia Butters was in Once Upon a Time in Hollywood. I have to say this would be my childhood dream outfit! Very cute.

Some other took fashion risks and I’m not sure they worked..

Florence Pugh from Little Women. Not loving the belt and the matching shoes. Too Bridemaidly to me. Color was beautiful. Hair and makeup were pretty.

Hmm. All I am going to say is Billy Eilish is 18 and appears so. Are these nasty fake nails going away anytime soon? I’m so over that trend.

Kristin Wiig took some serious fashion risks with this and with her short do I think it looked pretty cool.

Olivia Colman is lovely, but not sure this was the most flattering dress. I like her new hair though!

Margo Robbie was in a beautiful Chanel that I would like to see it without the arm bits. I think her dark roots and the extreme makeup keep giving her a harsh almost scary look that reminds me of her superhero films. Love to see a softer side of her. I still have to see Bombshell. Her performance is supposed to be great.

Saoirse Ronan.. What is this? Looks like a bad idea. Cute hair and makeup.

Lucy Boynton in what appears to be Chanel, but it’s just frumpy to be honest. The top does not fit right.

Rooney Mara..It’s odd, but sort of pretty. It works on the right person who is probably her.

Scarlett’s hair and makeup were beautiful. This gown was the loveliest shade, but it almost looked like it was going to fall off her chest from the side which bothered me. Fit may have been an issue.

Timothee Chalamet’s suit was different. He like to take chances and he’s young. What did you think? People said he looked like the car valet.

Big trends of the evening were less necklaces more bare necks and large earrings, or nothing at all. Rings were having a moment especially oversized cocktail versions worn on the forefinger as Caitriona is here..

Other looks that were popular were slicked back hair into knots or sleek looks. I love Spike Lee’s wife Tonya Lewis Lee’s simple chic hair and makeup. Her dress was gorgeous too.

Gleamy skin as seen on Renee, looked fresh. That’s a highlighter on cheekbones, jawlines and collarbones she is wearing. The Glossier highlighter is my favorite for this over a powdered face to get a little natural sheen.

When a necklace was worn, it was large. Zazie Beetz was a standout in the beauty department with her natural hair and makeup and sported a stunning necklace with her simple dress.

This was finished at 2 a.m. so I hope there aren’t too many errors!

Okay friends let’s hear what you all think. Feel free to tell me I’m wrong on any of these opinions and who I may have missed mentioning. And what are your thoughts about the show?

Links on this post may sometimes generate commission. Thank you for supporting the blog.

I’m kind of excited to share my pink Christmas t