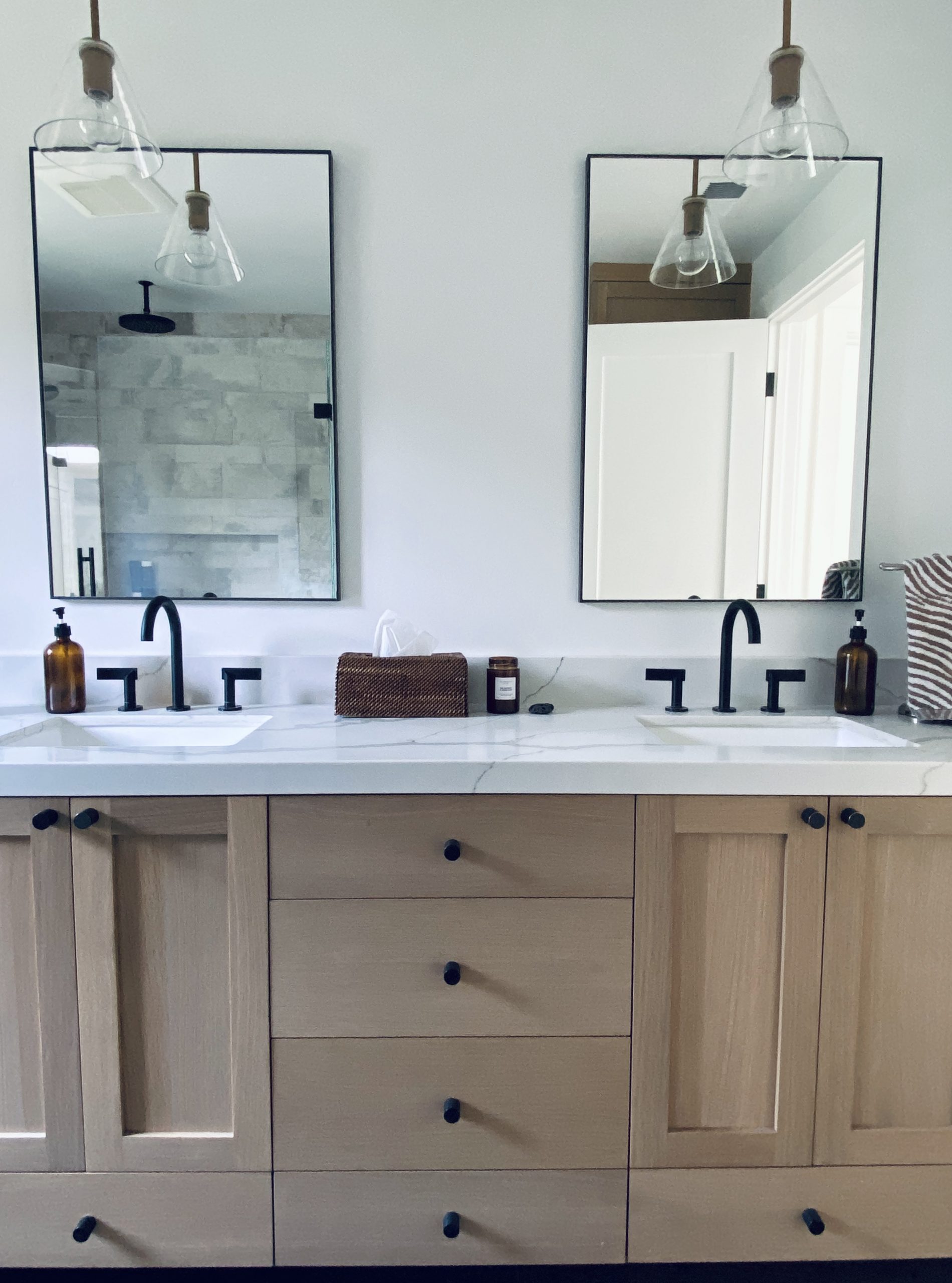 Well friends can you believe it has already been a year since we moved back into the house? I realized I still hadn’t gotten out some renovation posts for the different spaces. When we moved in last July and there were a lot of things getting finished. By fall most things were done. I thought you might like to see the before/after shots and the materials I used in the boy’s bathroom which is one of the best parts of the renovation to me!

Let’s start with the before..The bathroom mostly retains the same footprint. We removed the cabinet adjacent to the counter, enlarged the window and changed it to obscured glass, and removed the tub to make a glass enclosed shower. It wasn’t a bad little bath, but the single sink was not ideal with two kids, especially now that they are 18 and 21.

When the spare bedroom was removed we got to annex the space that was previously a closet into this bath. That space is behind the wall above, behind the towel bar. The plan was to have cabinets built there for more storage. Still, the room would essentially be the same in size. Instead, my builder, Mike McCloud suggested we open the bathroom up more, and do the shower with a glass corner and keep that former closet space as an open area.

Look at the difference! You can see it feel much more spacious and open and it gives more room to move about and hang towels too.

I added pegs there and my cabinet guys built me a towel tower behind the door.

The vanity stayed in the same spot and we took over the end cabinet to give a longer counter and space for two sinks.

I love how these cabinets were configured. The boy’s bath has long pull outs at either end for tall bottles. (See below.) The wood is oak and has a stain called Blanco on it and is not varnished. All of the cabinets in my house were done by a father/son company called MJS Fine Cabinetry.

This is a few of the inspiration photos for the boy’s bath. I knew I loved this rustic kind of brick/stone look for the shower, black fixtures, and two modern mirrors and light counters and dark floors..

In the end, I didn’t go with the cool trough sink my designer Debbie who helped design the house layout, had suggested. I was worried we wouldn’t have enough counter space. One thing I do wish I had done was wall mounted faucets. The boys are always leaving their counters wet and the area around the fixtures especially. With kids, wall mounted faucets may be neater and less water on fixtures, and less water spots, or in the case of black fixtures, leaving some calcification.

For the floor I knew I wanted to use one of those beautiful wood look tiles. I went with this fantastic Statale tile from Walker Zanger that has a pickled color and with varying wood grain and rifts in it. It feels and looks like real wood. I love the tones of this line. We went with the Fumo and a grout called truffle. Perfect for dirty boy feet!

It feel great underfoot too and has some grooves to prevent it being slippery.

I found a rustic tile for the shower in almost the same color and look as my inspiration photo, in varied sizes at my local tile shop. I like the light, but not white in this small space to brighten and be a contrast with the dark floor. The tile is an Italian tile called Pave Brick by Sichenia, and the light color I used is called SIPBSO.

This is supposed to have a weathered painted brick look, but it’s a long wearing porcelain tile. Hard to find online- some about it here. Also to note for locals, I sourced this at Tile Fantastic in San Jose and a wonderful designer there, Caroline, helped me pull all the elements together with my photos.

Laying out the look here:

The stone floor is one of those preset natural stones mosaics. It’s by a company called Island Stone, also bought at Tile Fantastic.

For their vanity counter, I went with a slab of Vadara, a man made quartz that is pretty indestructible. I loved the mix of grey and brown veining in the Calacatta Bellezza. The slabs are 63 x 120 and two were enough for the boy’s bath and also my the laundry counter and pool bath vanity.

The faucets are Newport Brass matte black faucets . They look nice with the black window casings and the black shower door pull.

The Shower Fittings are also Newport Brass. The black has been challenging to keep clean. Unlike chrome it shows water spots in a white film. You have to be good about wiping it off regularly. Not sure if I would choose it again in a high use bathroom, but I do like the look. You can see on the hose it has already worn off on some parts in just one year..

I chose a rain shower and a shower arm on a sliding bar that is adjustable as they are quite tall.

Because they are guys, I always have wanted a Toto wall-mounted toilet. This was a tight space, so it gives more room when getting out of the shower and it tucks behind the cabinets. Americans aren’t used to these as much as Europeans, but the main difference is the tank is in the wall, and to service the toilet you reach the works through the buttons on the wall. The plate just comes off. In general this whole toilet system is a lot easier to keep clean, you can put a rug under it, less toilet to wipe down and I would suggest it to anyone with boys.

For the lighting, I chose these RH Utilitaire Pendants that have black cords, but a splash of gold and a masculine wrench detail on the inside. They sit in front of black mirrors..

I just noticed the stickers are still on the pendants.. I hate that! Gotta figure some way to get up there and remove them.. Why don’t the electricians ever do that?

I also went with two of these Infinity Black Rectangle Mirrors, 24 x 36 from CB2. They are beautiful in person, excellent quality and had a modern yet heavy luxe look to them. ( Aren’t these tissue box covers cool? They are by Kouboo and I have them in all my baths. You can buy them here.)

Knobs are by Top Knobs and have a finger groove under them.

Door hardware is Helios by Emtek in Flat Black. I went these handles and with single panel doors in the whole house, except in the master where I did glass knobs.

Believe it or not, I am still waiting on the towel rings I want and a few other things like wall art and the perfect rug in here, but I hope you get a little idea of how this bath came out.

Stay tuned my media room/den reveal is coming later this week! I also plan to show you all the details from the other baths and a list of the house materials, which is long overdue.

This has been a strange year with the pandemic and I realize I’ve got to get back to the renovation. Thanks for your patience if you’re still out there! I promise it is all coming soon!

Some links may sometimes generate a small commission. Thank you for supporting the blog. 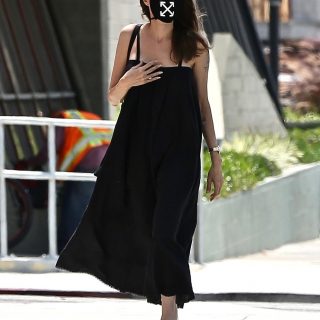 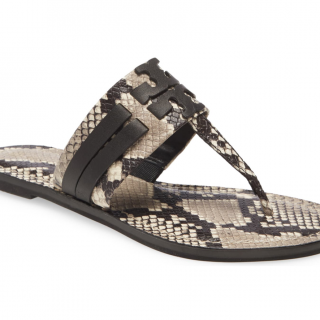 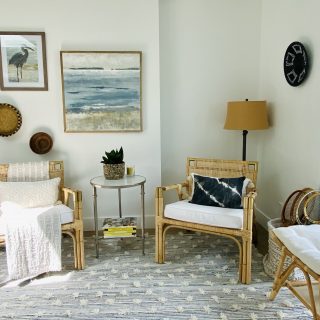 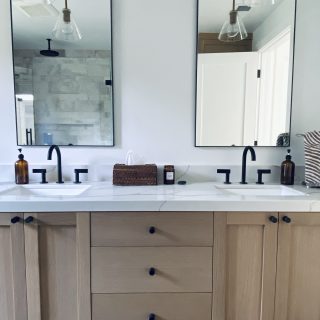 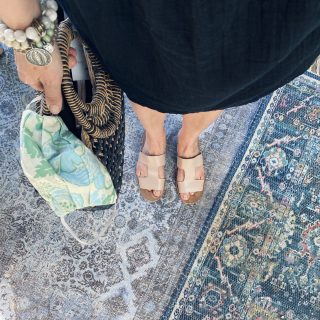 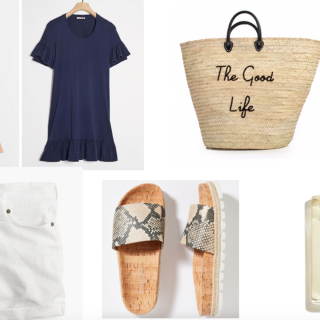 Monday morning...Hope you all had a good weekend.

Hello a little meandering post today about those d

My Tory Burch sandals from my weekend finds post c

Had Griffin clean my windows yesterday and I feel

Everyone got an extra drink and rain bath today.

A short weekend blog post with a few goodies I’v

Today - my ‘California’ room on the blog. A vi

Took my first ever watercolor class today via Zoom

Summer bowls tonight with our own tomatoes and cuc